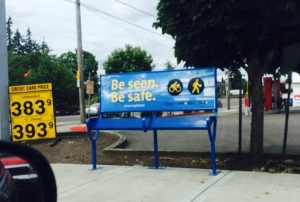 After a long day at work, it’s nice to sit down and wait for the bus. But in about 60 locations, TriMet’s new “leaners” take away that option, and the reason for the new stops are raising questions from riders.

TriMet said the new leaners were installed to meet the criteria of the Americans with Disabilities Act, a federal law that requires allowances be made for people with disabilities. The old benches were by law too wide for sidewalks, TriMet wrote in the announcement, and people with mobility devices couldn’t get by.

“The shallower leaner allows for installation in areas where sidewalks are not wide enough to meet the Americans with Disabilities Act (ADA) standards and accommodate a traditional bench.”

A TriMet spokesperson told the Oregonian that “many locations” didn’t comply with ADA regulations for mobility devices. That explanation was enough for the Oregonian, and besides a little snark implying the motivation was advertising-based, transit reporter Joseph Rose took the issue no further.

On TriMet’s Facebook page and social media, the riders doubt the reasoning. The leaners were cited as another example of the transit agency de-prioritizng riders for the bottom line— and it looks as though the federal disability law was only an excuse to install the new leaners.

Announced in early April, TriMet struck a ($3.3 million annually, the Oregonian reports) deal with Lamar Advertising to display advertising on vehicles and at stops. 600 new benches were funded by the company, and about 10 percent of those are leaners.

They’re not seats for sure, and only people of a certain height can actually use them to lean. They’ve been compared to medieval torture devices by The Portland Intelligencer, and commenters on TriMet’s Facebook page say they discriminate against children, the elderly, and people with disabilities who can’t use them to sit or even lean.

On FB and Reddit, supporters of the new leaners say it will keep “hobos” from sleeping at bus stops and reduce the amount of trash left by transit riders. Several commenters also suspect advertising is the real motivation: the leaners provide bigger space for ads and lack of usability keeps riders from blocking them from view.

Here’s the link to the Department of Transportation regulations concerning the width of sidewalks to allow for mobility devices, and a screenshot of the relevant statute: 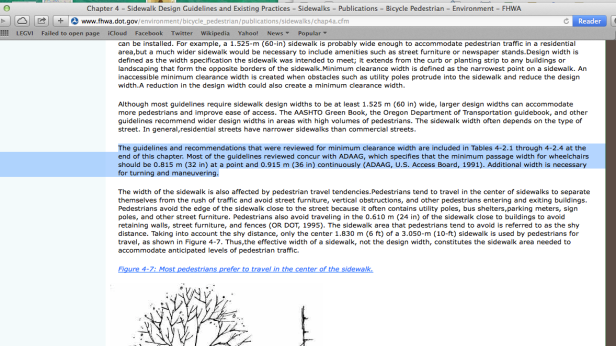 If you look at the photograph I took (at the beginning of the post), as well as the leaner pictured on Trimet’s webpage, there’s far more than the space required by the law.

Perhaps there are other motivations for the new leaners. Maybe preventing people from sleeping on benches or more visibility for advertising are viable reasons for replacing benches. Several Internet commenters believe that’s the case. If that’s the motivation, I’d prefer TriMet be honest and let there be a public debate before the change is made.

Maybe there are other statutes that led to the changes. I’ve asked TriMet which specific ADA regulations were the reason for the new leaners, as well as how many of the previous benches were actually in violation of the law. The question form I filled out on TriMet’s website said I would receive a response within 5 business days. Today, it’s been 6 days since my request.

I prefer to see the best in people and organizations, but TriMet has given authority over these benches to advertising company, and that company is likely doing what’s best for advertising— not the comfort of riders. I don’t want to believe that TriMet is using people with disabilities as an excuse to inconvenience riders, but until those questions get answered, that’s exactly what it looks like.

3 thoughts on “Did TriMet misrepresent the reason behind their new “leaner” benches?”