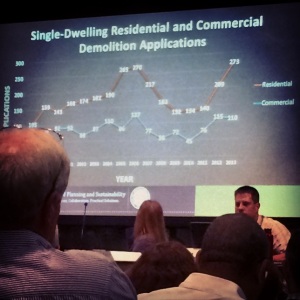 Neighbors have few protections or even notifications for residential demolitions, a vocal and clearly frustrated crowd learned at a panel discussion Wednesday night.

Residential demolition permit applications have surpassed pre-recession levels, said Shawn Wood, Portland Bureau of Planning and Sustainability, and he expects them to top 300 this year, what would be a record year in Portland. He said that doesn’t even include major renovations, projects that remove less than 100 percent of the current structure and foundation.

Neighbor frustration with demolitions has been well documented, and some changes have been made. A loophole for skipping neighbor notification was narrowed, and Jill Grenda, supervising planner for Bureau of Development Services, said a voluntary demolition notification process is being developed. She said BDS is also adding links on its website about demolition.

“If you come home and a house that used to be next to you is gone, that can be jarring,”  Grenda acknowledged.

Justin Wood, a builder with the Home Builders Association of Metropolitan Portland, said the demand for new construction in desirable neighborhoods is driving the demolitions. He said neighbors can go to their elected leaders if they’re not satisfied with the current process, and get involved in the Portland’s Comprehensive Land Use Plan, that’s in the process of being updated.

Maxine Fitzpatrick, executive director of Community Reinvestment Initiatives, said the City of Portland has invested a couple hundred million dollars into NE Portland, and as a result about 10,000 African American residents were displaced between 2000 and 2010. The city promised to bring 10 percent of those displaced families back to NE Portland, but she said that promise hasn’t been fulfilled.

Cathy Galbraith, executive director of the Architectural Heritage Center, said that Portland is losing valuable historic homes and neighborhood character in this trend of demolition. She said she became furious on a walk with Metro officials, when the official said all the single-family homes on Division would soon be gone. “We should have some say as to what happens in our neighborhood,” Galbraith said.

Someone once told me that “planners don’t get paid to keep things the same” but I find it ludicrous when planning documents (and campaigning elected officials) talk about “Portland’s celebrated neighborhoods” and then proposes absolutely nothing to protect the character that makes those neighborhoods so celebrated! It’s the context of vintage homes that blend so well with one another, the consistent use of high-quality materials, the regularity of setbacks, and the mature landscaping and trees— that’s what helps make up the character and it’s what disappears with demolition and replacement.

These demolition and rebuilds have other consequences, Galbraith said. Young families are being outbid by builders and are unable to buy starter homes. They are unable to compete with cash offers and fact that sellers wouldn’t need to give a cut to real estate agents, or have to be concerned with defects to a house that’s going to be removed.

To start to get a handle on the demolition epidemic in Portland, Galbraith suggested these 4 fixes in her blog post:

1. Notice doesn’t fix the problem, but it should be a requirement— not simply voluntary. Neighbors should be given time to prepare for the noise, dust, and environmental hazards (like asbestos and lead paint) that could be spread around the neighborhood.

3. Houses that are over 50 years old or on the Historic Resources Inventory should have a mandatory 120 day demolition delay. In several cases neighbors have bought the property rather than have it bulldozed.

4. Front and side yard setbacks from the previous house should be maintained. She wrote that this would make sure the streets cape remains more like the neighboring houses.