In light of the risks presented in the film, the fight over exporting fossil fuels through the Northwest has made the news twice this week. An air permit that would allow an oil train terminal to double its capacity was approved Tuesday, while a plan to barge coal down the Columbia River to an export terminal was rejected on Monday.

Another important decision will be made Friday: the state’s transportation commission will decide this week whether $2.9 million in lottery dollars will aid the expansion of oil trains through the region.

Safety preparations should happen first, said activists and local leaders including Multnomah County Chairwoman Deborah Kafoury, and the mayors of The Dalles, Albany, Eugene, Milwaukie, Beaverton, and Hood River. There was no word on how Portland city officials weighed in.

The project would add safety improvements to the rail line running through Ranier, Oregon. It would add curbs, reconfigure parking, and add pedestrian crossings. The improvements would allow trains to move through town at 25 mph rather than 10 mph. It would allow for the increase of mile-long oil trains from 24 to 38 a month, the Oregonian reports.

The commission is also planning to fund $4 million worth of dock improvements at Port Westward to allow access to larger ships moving oil and coal. That money would also come from ConnectOregon, funded by lottery proceeds.

The official comment period was closed at the end of July. ODOT received over 8,300 comments in mail and electronic format. Feedback on the decision can be offered to the board through email: but the opportunity to influence the decision has probably already passed. This is my issue with the media: we hear about these decisions after they happen, but the opportunity to weigh in is rarely offered.

Vice’s documentary “Bomb Train” is powerful, and contained footage of the recent accidents I’d never seen before. Amateur footage of the oil trains explosion in Lac-Megantic, Canada begins at 5:00. Equally disturbing is the fact that these shipments were approved by state regulators within weeks of the permit filing— without public notice or input.

Extracted from the Bakken Oil formation in North Dakota, the oil being shipped is extremely flammable and transported in rail cars that have been known to be unsafe for decades. As the film shows, these trains travel through heavily populated areas— especially in downtown Seattle. Portland has oil shipped over its rails, and the image below shows the evacuation zones if a spill or fire occurred. 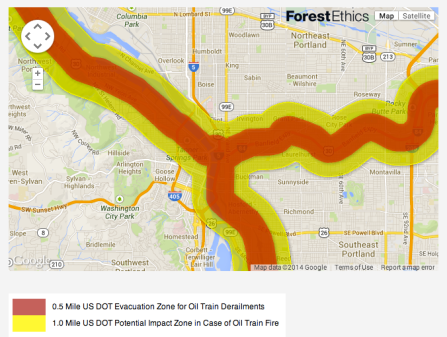 David Osborn is a volunteer with Portland Rising Tide, an environmental group fighting to shut down fossil fuel exports. He said if we want to stop contributing to climate change, we must stop these exports.

There are 20 oil, gas, and coal terminals throught British Columbia, Washington, and Oregon. Osborn said he appreciates the work done by Vice, but it doesn’t take into consideration all the problems with fossil fuel exports in the region.

Osborn recommends people joining a group to have the biggest impact on the fossil fuel export issue. Columbia River Keeper also grapple with the broad issue of fossil fuel exports, he said. Sierra Club and Greenpeace are involved as well, but only work on one aspect (coal trains, mainly), and don’t involve locals in the decision-making process. Rising Tide is a grassroots organization, and actions are chosen at a local level, he said.

Along with weighing in on policy decisions, Rising Tide also conducts direct actions like blocking export terminals. This weekend, members will be participating in the Washington State Oil Train Summit. Osborn said it’s challenging to organize on the export of fossil fuels because people have busy lives and some think it’s too big a problem to solve.

Rising Tide can be contacted through its website. Sign up for action notices from the Sierra Club here, and Greenpeace’s Quit Coal drive here.

“I feel like that people don’t know we fail to understand the simplicity of the choices before us. If we want to address the climate crisis we must stop increasing exports and burning of fossil fuels and it’s as simple as that,” Osborn said. “And we’re doing the opposite.”

Politico reports that the over 400 oil train incidents since 1971 have skyrocketed in the last five years:

This year has already shattered the record for property damage from U.S. oil-train accidents, with a toll exceeding $10 million through mid-May— nearly triple the damage for all of 2013. The number of incidents so far this year— 70— is also on pace to set a record. Almost every region of the U.S. has been touched by an oil-train incident. These episodes are spreading as more refineries take crude from production hot spots like North Dakota’s Bakken region and western Canada, while companies from California and Washington state to Missouri, Pennsylvania, Virginia and Florida build or expand terminals for moving oil from trains to barges, trucks or pipelines.

One thought on “Vice Video looks at what critics call “bomb trains,” and the fight to export fossil fuels through Portland and the PNW continues”