Many neighbors aren’t happy about a 200-person homeless shelter planned for the Hansen Building at 122nd and Glisan, and tempers flared at a meeting Thursday (7/7) night.

It was good to see that both KOIN 6 and FOX 12 covered the meeting. Their stories focused on neighbors’ concerns about potential threats from homeless folks staying at the shelter and the fact that the neighbors weren’t involved in the decision.

In a tense exchange captured by FOX 12, Multnomah County Chair Deborah Kafoury didn’t answer a question about why neighbors weren’t consulted, responding that they are placing shelters everywhere around the county.

There isn’t a lot of detail in those stories, but you definitely got a sense that many neighbors are worried and angry. One neighbor who supported the shelter made the point that homeless are already in the neighborhood.

Many neighbors, including myself, were turned away from the meeting because the room was full. A person who worked at the building running crowd control said there were about 350 people packed into a room meant to hold 150. It looked like about 50 people were turned away. 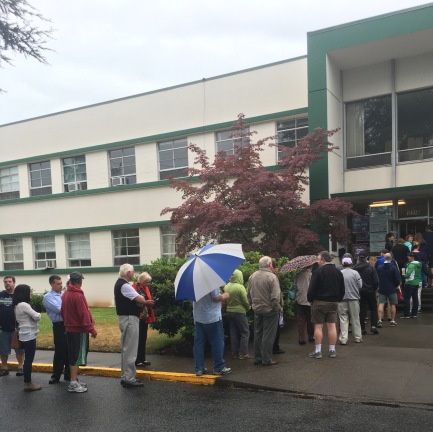 I received a mass email from Kafoury just after 5 pm. She apologized that there wasn’t enough room for everyone in the auditorium, and made assurances that neighbors and residents would be kept safe once the shelter opens, and the neighborhood would not be disrupted.

Slated to be open before the end of the month, the Hansen shelter is to be temporary, open for only about 12 to 18 months. “The shelter will cost an estimated $1.3 million annually with a staff of roughly a dozen people providing services, including access to housing, health and income resources, as well as referrals,” according to a release from Multnomah County.

The plan was announced officially Wednesday (7/6), but from what I could find it was first floated in a 6/28 Portland Tribune article. The story had no mention of the environmental problems with the building, but in a later Tribune/KOIN story included those concerns from Multnomah County board members Loretta Smith and Diane McKeel:

There isn’t a working kitchen in the building. Will the residents have to travel 45 minutes to downtown for meals? According to the story, the building doesn’t have central air conditioning or heat, and the water runs brown and has a high bacteria count if you don’t let it run before drinking. Black mold, sewer flies, and asbestos are problems that have been remediated, officials said.

Smith and McKeel want to see the unused Wapato Jail re-worked to house the homeless. The Hansen shelter is supposedly temporary; as was downtown’s Peace shelter that opened January and is closing soon. A women’s shelter in Multnomah Village opened fall of 2015 and closed in May, based on a promise from Mayor Charlie Hales. A May KOIN news story said one women’s shelter will be opening up in the summer and another in the fall, but we don’t know how many or what category of the 267 (about 80 to 100 of those being men) displaced from the Peace shelter will be housed at Hansen.

Another big concern from neighbors: we don’t know anything about the people staying at the shelter. Peace’s rules don’t require identification, though they do forbid drugs and drug paraphernalia.  I’ve heard it will be the same set of rules for the new Hansen shelter, but I haven’t confirmed that yet.

I regret the way this has been handled by Kafoury— and I’m glad she’s acknowleged her mistake. I’m waiting on a few questions from Multnomah County officials, including how people can get on the email list for updates on this project.

Are there any assurances that would make you comfortable with this shelter, or is it simply a hard no? So far it doesn’t look like much had changed since the meeting, but if you have any questions please let me know. I’ll do my best to keep up with this issue.