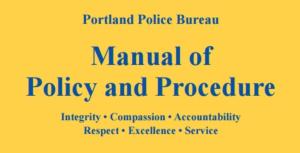 The last day for the public to comment on several Portland Police Bureau directives under review is tomorrow, Thursday, September 21.

Dan Handelman, with Portland Copwatch, thinks the most important fix concerns the definition of profiling in Directive 344.05, Bias-Based Policing/Profiling Prohibited (a link to the draft).

Handelman wrote: “#1 issue should be fixing the ‘Bias Based Policing’ Directive so it either pulls out the word ‘solely’ or says ‘solely or primarily’ when describing why an officer taking police action should not rely on a person’s race, religion, gender, etc.”

From Directive 344.05 (the strike-through phrases are previous changes):

Profiling: A form of bias-based policing, wherein a law enforcement officer targets an individual for suspicion of violating a provision of law based solely on the individual’s real or perceived age, race, ethnicity, color, national origin, language sex, gender, gender identity, sexual orientation, political affiliation, religion, homelessness or , unless the officer is acting on a suspect description or information related to an identified or suspected violation of a provision of law.

Follow this link for a complete list of the directives under review, make comments, and to get email notifications when other directives are posted for review.

The link to submit comments on Directive 344.05 is broken. Both Handelman and I asked PPB to fix it, but neither of us got a response. He recommended using this link to comment.

Directives are the more than 100 official documents that are “the foundation of PPB operations”, according to its website. The directives are formally written, and seem far removed from the intensity and high stakes of policing, but changes in wording can make the difference in how PPB officers interact with the public.

Handelman said the project has commented on over 100 of the directives since it started in 2013. PPB directives are up for review every two years, major ones singled out in the 2014 Department of Justice agreement can be subject to review every six months to a year.

PPB is more open to clerical errors than broad policy changes, he said, but he noted a few important changes that came from the accountability groups that track the directives:

The bill outlawing police profiling was signed by Gov. Kate Brown on July 8th, 2015, and went into effect January 1st, 2016.

A report from the Work Group on the Prevention of Profiling by Law Enforcement was presented to the State Legislature on December 1, 2015.

Profiling based on “the individual’s age, race, ethnicity, color, national origin, language, gender, gender identity, sexual orientation, political affiliation, religion, homelessness or disability” was outlawed, and the bill mandated a reporting / complaint system and tracking of police stops for each of the state’s law enforcement agencies.

More data is better than no data, I suppose, but it’s impossible to prove or disprove a police officer’s motivation based on complaints or a broad racial percentages of stops.

Handelman addressed the topic in his original 3,100 word comment to PPB: “The reality is, sometimes officers see a person and pull them over and then sometimes decide to explain the stop by relying on a traffic or equipment violation– but sometimes no reason at all is given.”

I asked him specifically if he knew how each stop was tracked.

“I don’t think the exact reason for every stop is part of the screen that officers have to fill out. They have to say ‘City Code, Equipment, License, Major Violation, Minor Violation or other.'”

“They track the race of each driver or pedestrian. They’ve been throwing out a lot of pedestrian data claiming the stops were ‘mere conversation’ and we’ve been trying to get them to keep those data. (After all, if a cop disproportionately goes up to African American Portlanders to ‘chat’ that is a form of profiling.)”

PPB compiles Stops Data Collection Quarterly Reports, but tracking the race of those stopped doesn’t give any information on the legitimacy of the stops.

Bias isn’t always conscious, so a better idea, I think, would be to require police to cite a specific reason why they made a stop rather than choose from a list of options.

The Portland Copwatch webpage has a good history of the group’s events, reports on PPB shootings, and information on the City of Portland’s agreement with the Department of Justice. Also included is list of all the fatal shootings by PPB since 1992.

I think Copwatch does a good job tracking the progress of police accountability. Not all of what they share is as technical as comments on directives, but it’s all important and worth following. Some can make a strong case that the entire system of policing is broken, but if you’re an advocate for reform, Copwatch is worth supporting.

Handelman said concerned citizens can contact them through their webpage to get on their email list. He said they need to screen people to make sure some things don’t go out to the media.