I love stories. Stories are how we make sense of the world. Since I began researching Montavilla history about two years ago, I feel like the stories of this neighborhood have been revealing themselves a layer at a time, in all their diversity and complexity.

Most recently my research on Montavilla’s Black community has added yet another layer. It’s a layer so complex and so rich that it’s really several stories.

To me, it makes sense to begin with Shiloh Baptist Church, since for over 40 years it was a center of the community’s spiritual, cultural, and social life.

Before there was Shiloh Baptist in Montavilla, there was Montavilla Mission, founded in 1916. A photo and short article in The Sunday Oregonian of July 30, 1916 credits recently-license preacher, George Gardner (1880 – 1937) and Mrs. Ida “Thomas” [Thompson] (1872 – 1960) with starting this Church which met at East 79th Avenue and Stark Streets.

In the photograph above, Rev. Gardner stands proudly in the center of his flock, but it’s difficult to say which of the women might be 44-year-old Ida Thompson. The congregation around Rev. Gardner seems to be the majority of Montavilla’s Black population at the time.

I count 41 individuals in the photo, compared to the 60 individuals identified as Black or Mulatto that I found in the 1920 United States Census for the area corresponding closely to the boundaries of our current Montavilla neighborhood.

For such a small population, a neighborhood church was unique. At this time, most Black Portland churchgoers would have attended one of the established churches, Mt. Olivet Baptist or Bethel A.M.E. Church, several miles away. It took grit and determination to establish and maintain such a small church for so long.

One of the steadfast leaders in this effort was Ida Thompson, who was frequently praised for her contributions. In 1929, when Shiloh Baptist celebrated its 12th anniversary, she was called the Mother of Shiloh. She was not only a founder of the Church, but her commitment to it outlasted every pastor but the last. She was still a trustee in the 1950s.

Who, you may wonder, was this resolute Ida Thompson?

She was born Ida E. Newberry in Hannibal, Missouri in 1872, a mere seven years after that state abolished slavery. Perhaps some of her dedication and resolve came from her father, Lewis Newberry (1842 – 1891), who enlisted as a 19-year-old farmer in the Union Army’s 55th Massachusetts Volunteer Infantry.

This Black regiment fought alongside the famed 54th at the brutal Battle of Honey Hill, South Carolina, as well as other battles in the South.

Because of post-Civil War segregationist laws in Missouri, Ida would have attended a school for Blacks only.

At 16. she married her first husband, Alfred Slayton (1867 – ???) in Hannibal’s oldest Black church, Missionary Baptist. Perhaps this is where her passion for church work began. In 1889 her son, Marcus, was born. By 1906, the Slayton family was living in Denver, Colorado.

Why did they move? I’ve found no specific evidence, but one factor was likely the desire for a safer place to live.

A 2017 study by the Equal Justice Initiative identified Missouri as having the second highest rate of racial lynchings— after Oklahoma— outside the deep South. Furthermore, Marion County, where Hannibal is located, is part of Missouri’s “Little Dixie” area, which had a higher rate of slavery in 1860 and later a higher frequency of mob violence than the rest of the state.

The map below tells the story. It was published by the National Association of Colored People in 1922 and shows what was then known about the number of lynchings in each state between 1889 and 1921. Each dot represents an individual lynching, and this gaves an idea of the risks families like the Slayton’s needed to consider, although they would have relied on reports in the Black press. 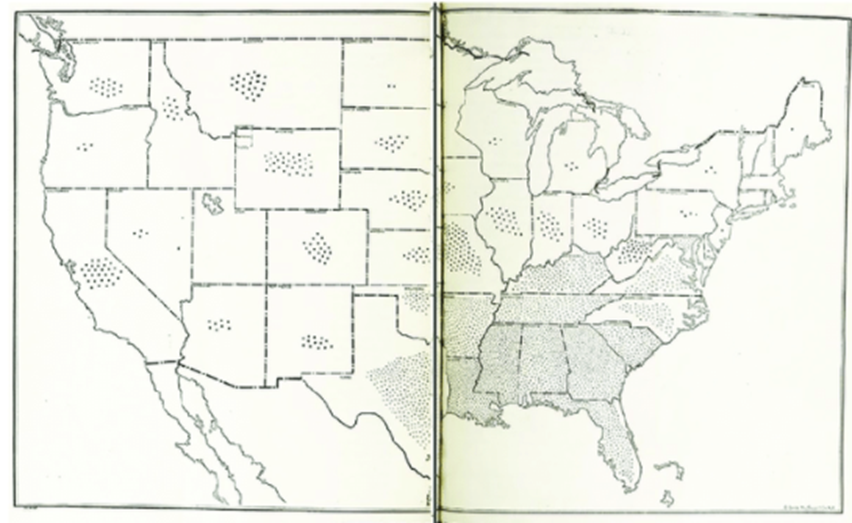 Missouri, in the center just right of the fold, has a sizable cluster of dots. Two states to the left, Colorado has substantially fewer dots. Oregon, where Ida moved in 1913, has only four dots. So her moves may represent relocations to places that would have been seemed safer.

Ida and others fleeing Jim Crow laws and lynch mobs may not have known that Oregon, from its very inception, did not welcome Blacks or other minorities. Most Black migrants like Ida would settle in Portland, where they still regularly encountered discrimination in housing, employment, and the justice system, to name just a few of the of the social inequities.

In Denver, both she and her husband were active in Bethlehem Baptist Church She was superintendent of the Sunday School and he was a deacon. Of course, they would have known Bethlehem’s Rev. Alexander E. Reynolds, who will later become part of the Shiloh story.

1913 was a year of many changes for Ida. She and Alfred divorced, and Ida moved with her son to Portland. Within a few months after she arrived, Ida married Henry C. Thompson (c. 1862 – c. 1922). Three years later, as we’ve seen, she helped give birth to the Montavilla Mission Church.

By 1919, the congregation had dwindled to only nine. But Mrs. Thompson did not give up easily. She and her friend Mrs. Sarah James purchased a lot with a house at the northwest corner of NE Everett Street and NE 76th Avenue, a mere block from where Ida and Henry lived. This house would serve as the church, despite repeated efforts to rebuild, until the 1950s.

It was a convenient location for the majority of Montavilla’s Black residents, located between Burnside and Glisan Streets, from NE 74th Avenue to NE 79th Avenue.

In 1919, the church was renamed Shiloh Baptist Church of Montavilla. Shiloh— a Hebrew name associated with the New Testament Messiah— was a popular designation for Black Baptist churches throughout the country. Since Rev. Gardner’s birthplace, Selma, Alabama, had its own Shiloh Baptist, perhaps he is the one who suggested this name.

While Rev. Gardner would lead the Montavilla church off and on for several years, in 1919 he was replaced by Rev. Alexander E. Reynolds of Denver, perhaps recruited by Ida Thompson for his exceptional fundraising skills. (Shiloh Baptist was then heavily in debt.)

I doubt Rev. Reynolds succeeded, since the congregation would remain in debt for years and since a new church was never built. In any event, he did departed for the greener pastures of Yakima, Washington a little over a year after he arrived.

In the early 1920s, Shiloh Baptist was serving the wider community in spiritual and social ways. In the summer of 1921, it brought in an evangelist, Rev. Lowe, to lead a revival. Whether or not the Shiloh community felt a need for spiritual solace after the Tulsa Massacre— one of the worst incidences of racial violence in US history— a large audience of both Blacks and other community members attended.

Another example of community service is the offer of meeting space for local social groups, such as a Black tennis club begun started in 1922. (A tennis court for Blacks had been constructed recently.)

In 1923 and 1924, Shiloh had a run of bad luck. In 1923, they got some bad press when their recently hired pastor from New Jersey was arrested in— of all things— a moonshine raid. It was Prohibition, after all, so Rev. Elijah Moseley and his fellow tipplers were fined $10. The indiscretion was covered in the October 11 and 13 editions of The Oregon Journal.

Even worse, about this time, Shiloh almost lost its property. But it was rescued by Rev. J. W. Anderson and Rev. W. D. Carter of the Northwest Coast Baptist Association. On November 1, 1924, The Advocate, one of Portland’s two Black newspapers at this time, welcomed Shiloh Baptist back after months of silence.

By 1926 / 1927, life at Shiloh Baptist was looking up. Rev. Gardner was back. The Church celebrated its eighth anniversary. Sunday School attendance under Mrs. Thompson was up. The church debt was down to $300 from $800. Clubs met. There were barbecues, chitterling suppers, holiday parties. The Advocate, always on the lookout for positive community news, recorded the tiny church’s successes.

Just as church life seemed so positive, a frustrated Rev. Gardner preached his last sermon on Nov. 6, 1927. He chafed at being Shiloh’s janitor as well as its pastor, and also complained about parishioners preferring movies to his soul-stirring sermons. And that temptation was just a block away.

The Granada Theater opened in 1925 on E. Glisan Street, mid-block between NE 76th and NE 78th Avenues. Were he alive today, Rev. Gardner might think it divine justice that the Highland Christian Center now inhabits the very site where the Granada once stood.

More changes came quickly in 1928. Mrs. Thompson moved to her recently-purchased chicken farm in Clackamas, although, as we’ll see, she continued her church work. As Shiloh lost a Sunday School superintendent, it gained a new pastor, Rev. W. T. House.

With the coming of the Depression, Shiloh Baptist experienced a succession of pastors. Rev. House resigned in 1929 and Rev. Gardner returned in 1931. Then, in 1933, came Rev. Robert E. Donaldson (1885 – 1966), freshly out of the Moody Bible Institute. He served for 14 years, the longest period of stability in Shiloh Baptist’s history.

Rev. Donaldson initiated several benevolent and outreach initiatives. Here are a few. In 1938, he founded a retirement home for Black clergymen, the first of its kind in the Northwest. (It was located just across the street from the Church in the 1890 house at 7524 NE Everett St. which still stands.) In 1939, Shiloh hosted a well-baby clinic and presented programs of evening entertainment at Hope Presbyterian Church (NE Everett Street and NE 78th Avenue), featuring the Velvet Tone Singers of Montavilla— I love that name— and at the Institution for the Blind (where Multnomah University is today).

These name changes correspond to a period of difficulties and discord, much of it stemming from the condition of the church facility. By the 1940s, it was in disrepair. The City condemned in 1948.

There were efforts both to restore it and to build anew, efforts that caused a split into two factions, Ida Thompson, Sarah James, and Rev. Donaldson on one side and congregants loyal to Donaldson’s successor, Rev. Robert H. Anderson, on the other.

This would devolve into litigation as well as moves to other venues. Rev. Anderson continued to lead Shiloh Baptist his retirement. In 1965, Crown Construction company replaced the old house-cum-church with the present duplex that stands.

To me, this is, overall, a remarkable story of dedication and determination. Shiloh Baptist could have faltered and ceased to exist at several points along its historic path. But it didn’t.

Someday, maybe a plaque will mark the spot where Shiloh Baptist stood.

For now, its memory is preserved in the National Register of Historic Places, as part of a multiple-property listing, which was just approved by the National Park Service in July, 2020.

The Advocate: This is one of the main sources of information on Shiloh Baptist Church and the people associated with it. Although not all issues of its long run (1903 – 1937) are available, digital issues from 1923 to 1933 are available online in the University of Oregon’s Historic Oregon Newspapers database for your perusal.

Darrell Millner, Carl Abbott, and Cathy Galbraith, “Cornerstones of Community: Buildings of Portland’s African American History” (1995) is a useful reference for Oregon and Portland Black history in general and for information about places of historical significance.

This is Portland’s application for a multiple-property listing in the National Register of Historic Places that was approved by the National Park Service in July, 2020. It includes a detailed account of properties and relevant historical background. Thanks to Brandon Spencer-Hartle of Portland’s Bureau of Planning and Sustainability for drawing my attention to this resource.