Editor’s note: This article has been revised to reflect the current boundaries of the Montavilla neighborhood more clearly. These differ from Montavilla’s earlier history, when the boundaries were more fluid and sometimes dependent on residents’ perceptions. Sanders will soon write an article about the changing ideas of what was and was not the community of Montavilla.

Additions to the story are indicated by italics, and erroneous information is struck through.

A woodsy lane someplace in southern England? No, it’s immediately adjacent to right here in Montavilla and you’ve probably driven on this very street. It’s the kind of special, often-unnoticed places that I plan to write about in a new series I’m calling “Montavilla Rambles.”

For my first ramble, I walked the streets of the Rosemont, Marchmont, and a north section of North Mount Tabor (aka North Tabor) Additions. These subdivisions are among the earliest ones platted at least partially within Montavilla’s current boundaries: Marchmont in 1889; North Mount Tabor in 1890; and Rosemont in 1891.

I also explored the Rosemont Bluff Natural Area. All of these areas lie between NE Halsey and NE Glisan Streets from NE 67th Avenue— Montavilla’s northwestern boundary above Burnside Street— to 69th Avenue.

For some unknown reason, the Montavilla neighborhood boundaries slice off the blocks between NE 68thand NE 67th Avenues of the Marchmont, North Mount Tabor, and Rosemont Additions.

Each ramble will cover a small, easily walkable section of the Montavilla. I’ll still write my articles about the broader aspects of Montavilla history, and intersperse those stories with these rambles. Along with some interesting sights like the shady lane above, I’ll also be on the lookout for little nuggets of unknown Montavilla history.

Map of the area covered: in Montavilla. Rosemont, Marchmont, and North Mount Tabor Additions. (The portion of NE 67th Avenue one in Rosemont no longer exists.)

If you want a quiet morning walk or a cool retreat on a hot summer’s day, the 2.16-acre Rosemont Bluff Natural Area immediately adjacent to Montavilla’s northwest boundary, is a delightful choice. The trail starts out flat on both entrances— NE 68th Place south of Halsey and NE Hassalo Streets near NE 68th Avenue— then winds back and forth along an extremely steep bluff. This mini-forest in the extreme northwest corner of Montavilla earned landscape architect Brian E. Bainnson a Great Blue Heron Award for the restoration.

On this walk, I experienced a myriad of little pleasures: tiny, chirping birds flitting about in the natural area; inspiring front yard gardens; a beautiful remodel; charming bungalows.

For this article, I’ll focus on a few highlights: the Rosemont Bluff Natural Area, some historic buildings, and a 1906 dispute between North Mount Tabor residents and the owners of the gravel pit not far from their houses. 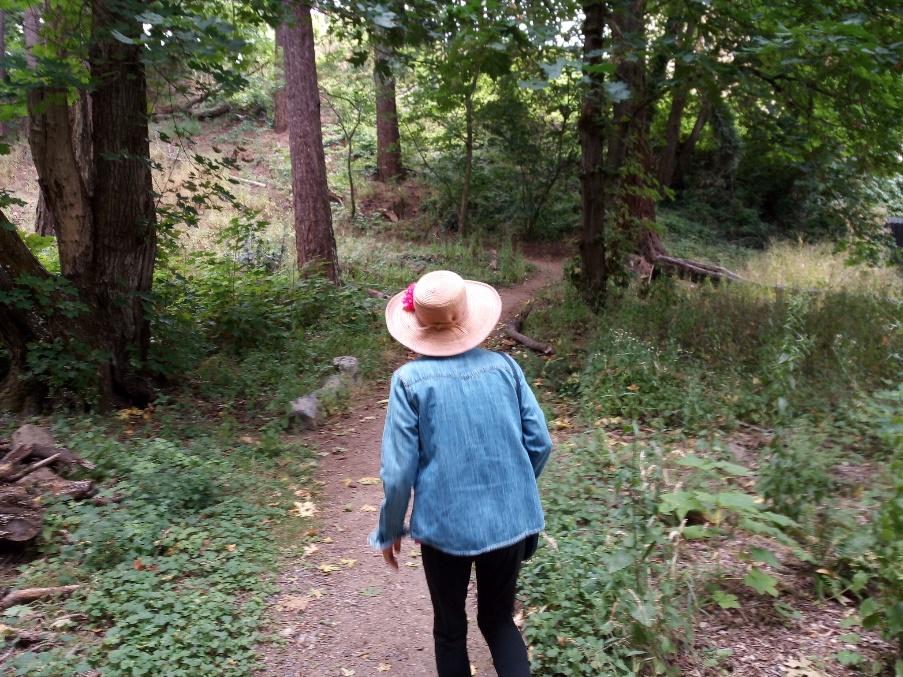 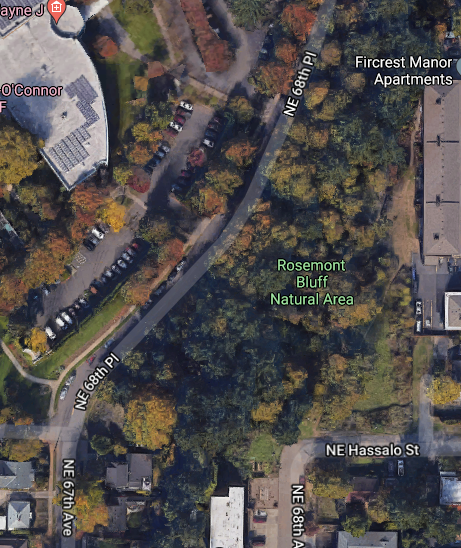 Rosemont Bluff is named for the adjacent Rosemont subdivision, one of Montavilla’s tiniest additions. Since it was platted 1891, I expected to find old houses. For those, I had to explore the additions to the south: Marchmont and North Mount Tabor. 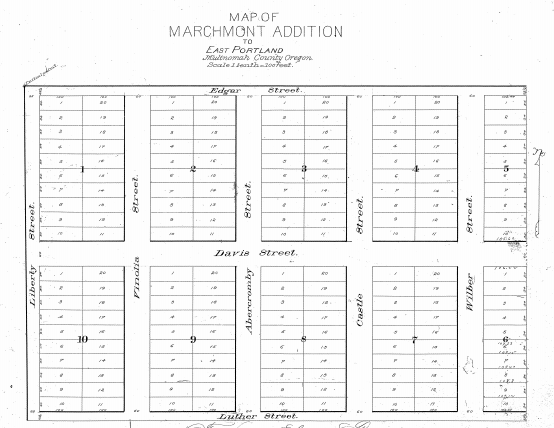 Original plat of Marchmont Addition. Note the original names of the streets. Abercromby Street (near the middle) is now NE 67th and Davis Street is now Pacific Avenue. To find the original plat map for your subdivision see the instructions at the end of this article.

In the Marchmont and North Mount Tabor Additions there are still a few houses built in the 1890s, shortly after lots went on sale. Ads for the Marchmont Addition listed lots for $200 – $250 per lot and claimed they had views of Mt. Hood and Mt. St. Helens. 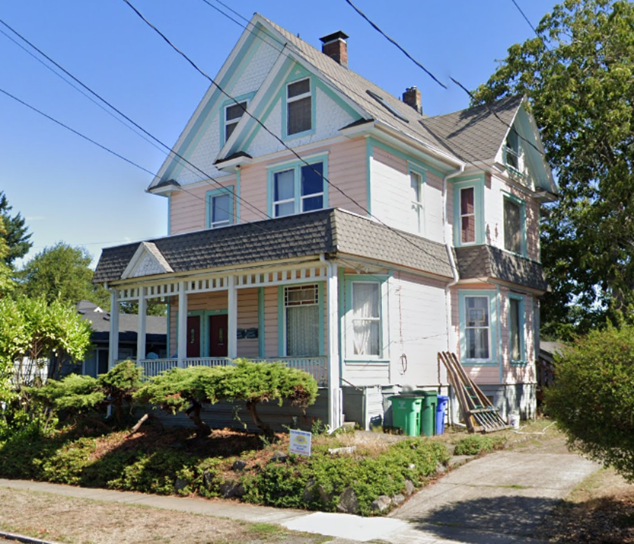 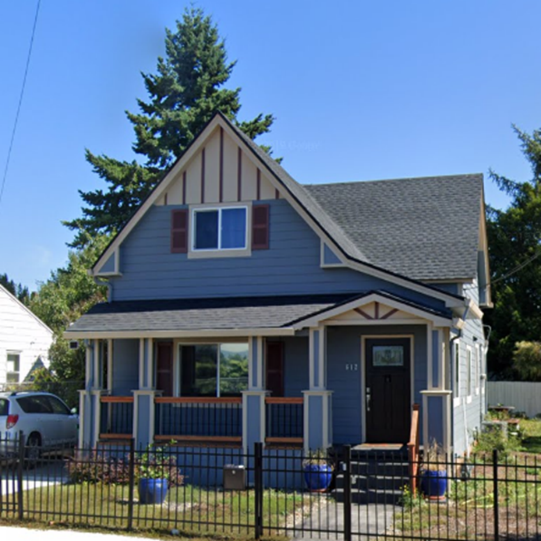 In 1906, residents who lived in houses like these were getting worried about the gravel pit at the western edge of NE 67th (then Abercromby). The contracting company, Portland Bridge and Building, was excavating like crazy to get gravel to use as fill for its many projects.

Back in those days official Montavilla boundaries had not been established, so The Oregonian of August 23, 1905 considered this gravel pit to be in Montavilla. 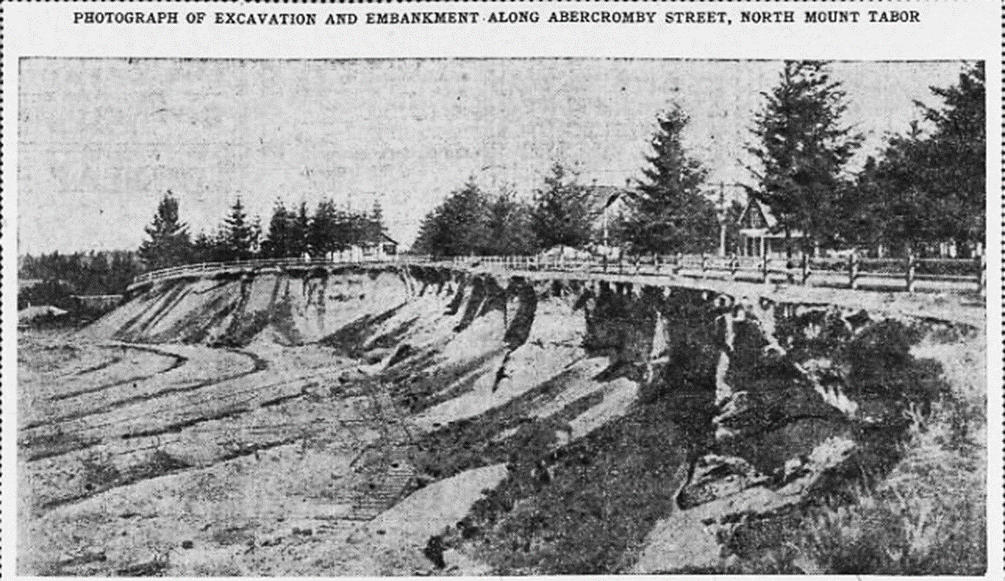 The steep east edge of the gravel pit is still evident in the Fred Meyer parking lot. The 1892 Victorian illustrated above is visible just beyond the old pit edge.

In 1906, North Mount Tabor residents near the gravel pit demanded that excavations be halted. They feared the deep digging might damage their homes. 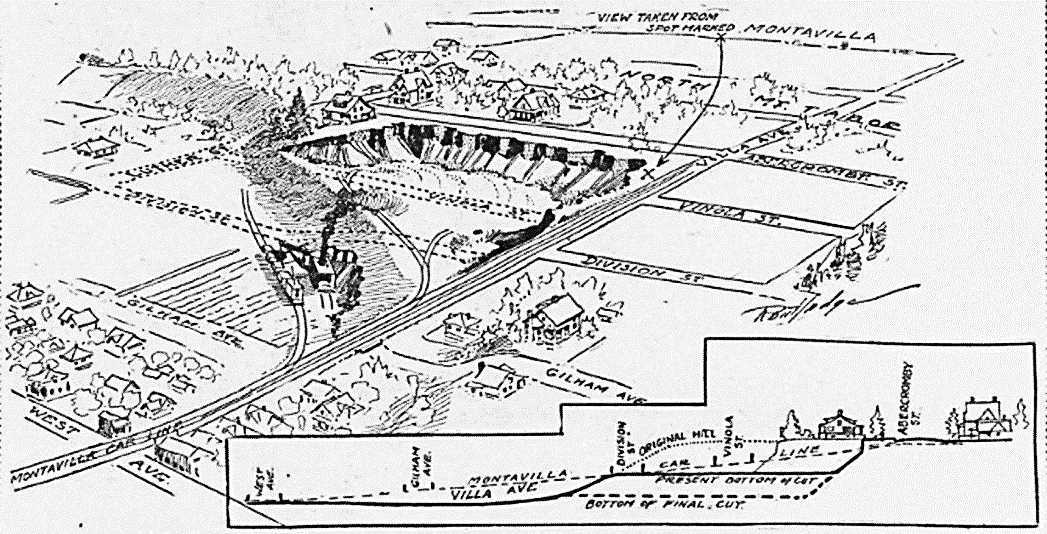 “Homes Menaced by Gravel Pit” read an Oregonian headline of the October 8, 1906 paper. The dotted lines in the pit indicated where the construction company had removed Vinola and Liberty Streets. The cross-section (bottom) shows where a block in the North Mount Tabor Addition between Abercromby and Vinola was removed.

The North Mount Tabor residents complained to Portland Bridge and Building got no results. With Montavilla just annexed to Portland, they took their complaints to City Commissioners Dan Kellaher and Frank Sim Bennett. The only solution they felt they could offer was the regrading of Abercromby (NE 67th) and Villa Avenue (NE Glisan). The houses along 67th survived and the pit ceased operation around 1911. The land lay vacant until the new Fred Meyer store was built in 1961 – 1962. 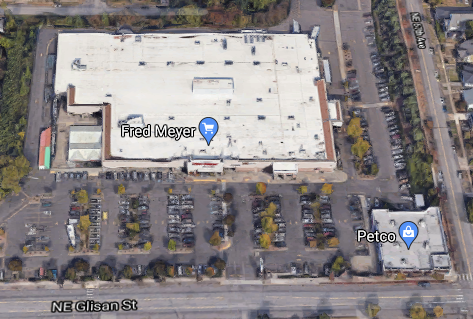 I haven’t said much about the Rosemont Addition, one of Montavilla’s tiniest subdivisions. But I found something there I really liked: a charming 1920s Mission-style apartment house on NE 68th, just south of Halsey. You don’t find many buildings like this in Montavilla. It looks like it belongs in southern California. But here it is in a place I’ve probably driven by a hundred times and never really noticed. It took slowing down to a walking pace.

And that’s what my rambles are mostly about. Taking the time to really notice the interesting little treasures of Montavilla. 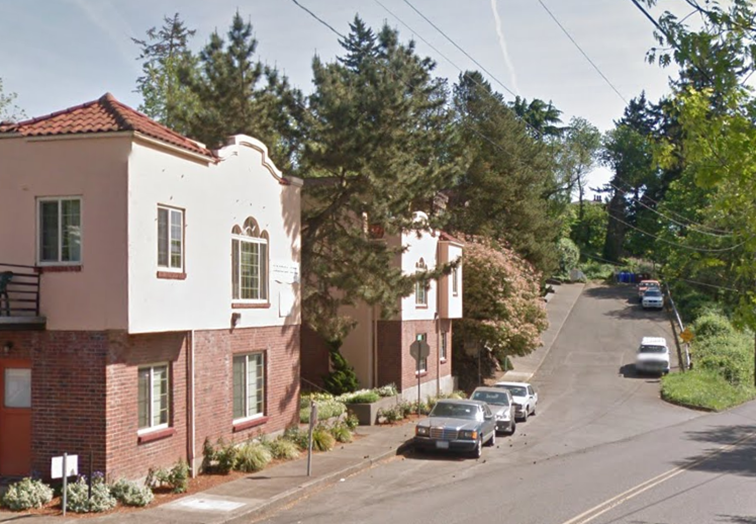 Do you know about any special, little known places in Montavilla you’d like others to know about? Please send me your suggestions for future Montavilla exploration.

Do you want information about your subdivision? Here’s how:

1. To locate the name of your subdivision (aka addition) go to portlandmaps.com and enter your address in the upper right.

(To find a map of the original plat and the dated declaration document) go to
https://www3.multco.us/H5V/?viewer=surveysail. (Be patient. This site sometimes comes up slowly.) Click the “I want to” button.)

3. Select Basic Survey Search on the menu.
Select from the pull-down menu “Subdivision Plat by Name” & click the “Next” button.

4. Type in the name of your subdivision and wait for the pull down menu to appear, then click on the appropriate menu item (sometimes there is more than one).

6. Under “Image List,” click on the underlined PL number. Use the plus sign (+) at the top to increase or decrease the size of the map and document.