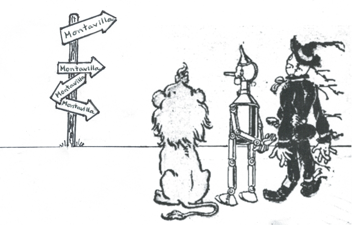 Where exactly is Montavilla? I know there is a Montavilla Neighborhood Association map (see the third image below). But I started having questions about Montavilla as a precisely-defined place when a neighbor who had lived most of her life near NE Glisan and NE 71st Street said she actually did not live in Montavilla. Why, I asked? Because she didn’t live near Stark Street, she replied.

So what, I wondered, did the locals think was Montavilla, starting from the date of its founding in 1889? This sent me in search of descriptions, events, and maps to find at least a partial answer to this question.

Below is an outline of some ways the concept of “Montavilla” evolved.

The name Montavilla did not exist when the first subdivision was platted in 1889. But the Mt. Tabor Villa Addition was the origin of the community and its name, Montavilla. 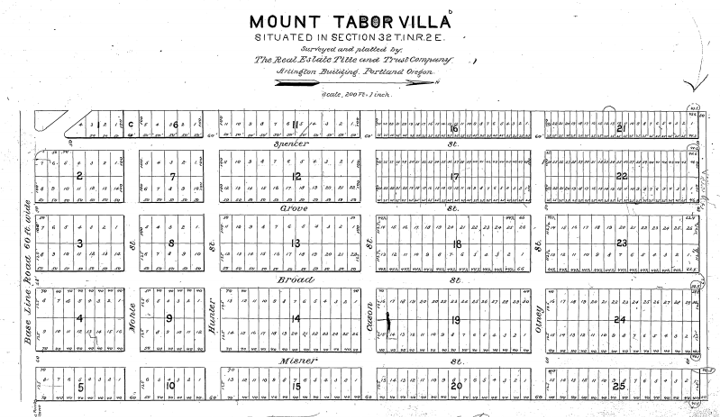 The beginning point: Mount Tabor Villa Addition. On this plat map, Base Line Road (SE Stark Street, which runs east to west) is on the left.

This map shows the current street names of Mount Tabor Villa Addition. North is at the right. 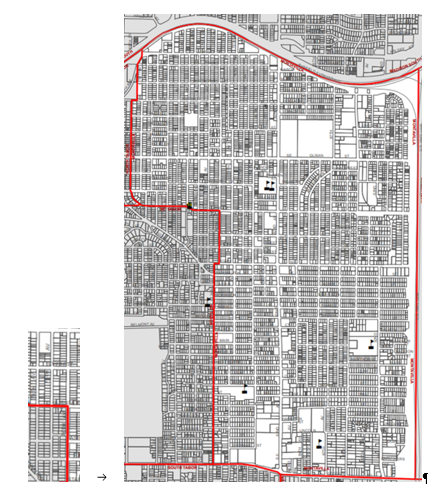 As other nearby tracts were platted between 1889 and 1891, a little community began to form. In the early 1890s it came to be called Montavilla, a contraction of Mt. Tabor Villa Addition. Assuming, incorrectly, that the name “Montavilla” was of Italian or Spanish derivation, a humorous Oregon Journal writer of July 20, 1906, thought “monta” should be changed to “monte,” to create a linguistically more appropriate name meaning “open sloping space.”

Subdivisions added between 1889 and 1891 include Mt. Tabor Villa Annex, Mt. Tabor Homes, East Tabor Villa, North Villa, Laurel Park, and Kinzel Park. In this detail, NE Glisan Street is at the top (below North Villa) and SE Stark and Washington Streets are in the lower third.

I’ve heard different stories about how and when the name Montavilla originated. But the earliest recorded usage I’ve found is the United States Post Office record of postmaster appointments.

In 1891, according to this record, Montavilla, James Downing (1836 – 1927) became the first postmaster for Montavilla, Oregon. The “post office” was apparently located in his grocery store on Base Line Road in Mt. Tabor Vila Annex. For more on the Montavilla Post Office, see our previous Montavilla Memories story.

By this time, newspaper accounts regularly report on this small, but active community. As early as 1891, the new residents built a town hall as a place “to consider questions affecting their welfare,” according to The Oregonian of March 14, 1891.

One of those burning questions was the need for a neighborhood school to educate the community’s 85 children. By 1892 they had a new school and their own school district. For more on the first Montavilla school, see our previous Montavilla Memories article. 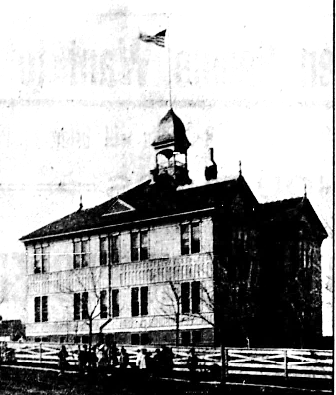 The school was built on this block in Mt. Tabor Villa Addition. Today you can still see the retaining walls on the west, south and east perimeters.

Despite such collective actions, newspaper reports of the 1890s also suggest a perceived distinction between neighborhoods north and south of Base Line Road (SE Stark): “Montavilla proper” lay to the north, Kinzel Park to the south. This distinction is evident in the discussion of an 1894 proposal to incorporate the “town of Montavilla.”

According to The Oregonian of July 7, 1894, “Monta Villa proper” favored incorporation, while Kinzel Park was opposed.

However, when it came to the 1900 census, the US government did not recognize this distinction. For the census, “Montavilla” was its own enumeration district, which included residents on both sides of the Base Line divide.

The 1894 incorporation proposition failed and the issue was finally put to rest in 1906 when 80% of Montavilla residents voted in favor of annexation to the city of Portland.

The annexation boundaries were identical to the Montavilla School boundaries, giving us an idea of what was seen as the Montavilla community at that time. We can see Portland’s 1906 definition of Montavilla in the undated Multnomah County School District map below. 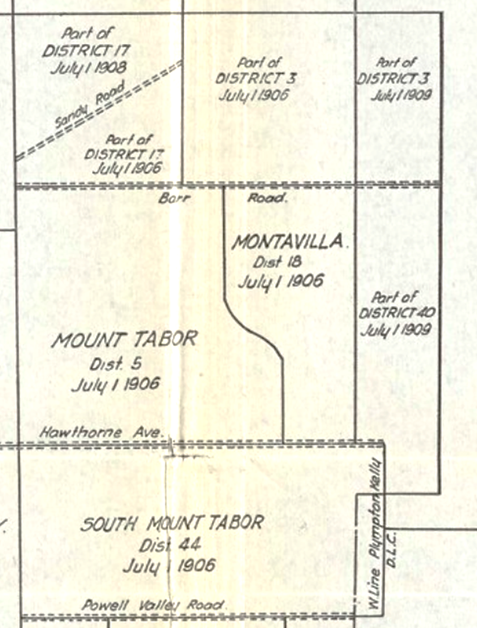 The Portland map detail below shows how real estate development was expanded in Montavilla by 1905. North of Glisan, we can see tracts extending towards the railroad—although not yet to Halsey Street. You can also see houses east of 82nd Avenue (then Meridian Street). 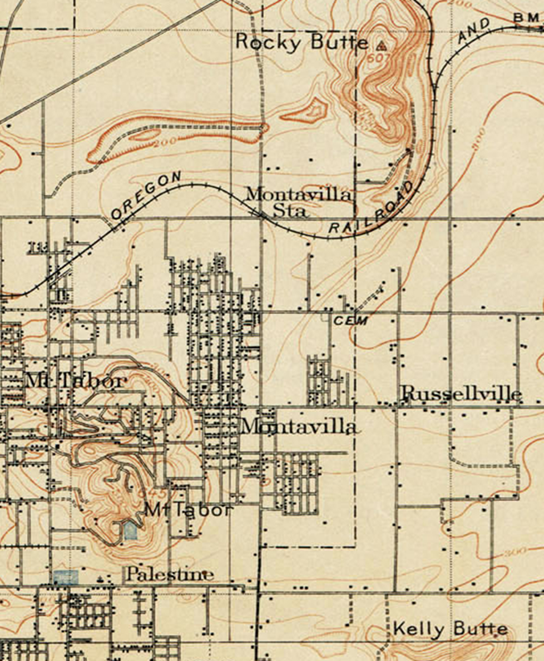 U. S. Geological Survey Map, surveyed in 1896, revised in 1905. The major east-west streets, from north to south, are Halsey, Glisan, Stark, and Division. The major north-south street in the middle is 82nd.
For the full map go here.

The various community improvement clubs that sprang up in the early 20th Century illustrate a growing sense of Montavilla identity and civic concern. These included the Montavilla Board of Trade, the Montavilla Improvement League, the Montavilla Welfare League. They advocated for such things as street improvements, sewer systems, parks, a local fire station, and a food cooperative.

The Montavilla Community Club, formed in 1922, championed for a Montavilla high school. That did not happen, but the club continued its community activism to at least 1950.

Neighborhood improvement advocacy continued in 1968 with the formation of the Montavilla Community Association. It was among the earliest groups in Portland to join in the local and national endeavor to increase citizen participation in city government.

The next big step in this civic effort was the formation of the Office of Neighborhood Associations in 1974. Neighborhood associations formed throughout the city and they defined their own community boundaries.

Montavilla neighborhood boundaries changed over the years, as we can see in the two maps below. In the 1974 map (top), the Montavilla and Mt. Tabor neighborhoods overlap. In later maps the overlap disappears. The southern boundary also changes: Powell Boulevard is in the earlier map; Division in the current one. Curiously when SE 76th Avenue became the lower southwestern boundary, a slice of Montavilla’s namesake, Mt. Tabor Villa Addition, from SE 75th to SE 74th Avenues is surrendered.

Another consequence of the removal of the Mt. Tabor-Montavilla overlap: the subdivision named Montavilla became part of the Mt. Tabor Neighborhood Association. I guess it made for a cleaner line, but I still find it ironic.

Today the Montavilla subdivision is no longer in Montavilla.

A significant change to Montavilla happened when SE Stark and SE Washington were transformed into one-way streets in 1970. It was designed to improve traffic flow generated by Mall 205 shoppers, but in the opinion of Don Carmichael, then chair of the Montavilla Community Association, they tended “to divide the neighborhood into segments” (The Oregon Journal, December 20, 1976).

The few examples I’ve presented here give an idea of how definitions of Montavilla have changed over time. And no doubt they will continue to change.