Watchful eyes remain on Portland’s Mt. Tabor Park— and elsewhere in the city— after a recent rash of arsons including three dozen within the beloved southeast refuge, billed as the only volcano within a major American city.

While relief was palpable on Mt. Tabor upon the arrest of three apparently thrill-seeking teens for setting 30-plus fires, solace was short term when two were released without bail pending trial. Charges against a third were dropped.

The judge presiding over their arraignment contended that no life-threatening harm had been done. Judge Adrian Brown’s release conditions forbid the suspects from entering any Portland park or having contact with each other.

Portland currently has more than 100 active open arson cases, according to Lead Fire Investigator Jason Andersen. Given the size of the park and its many woody, winding trails, the Mt. Tabor investigation was one of the most difficult his department has faced, he said. Broken entry gates exacerbated the problem.

Residents say the judge failed to grasp the seriousness of the situation. While some of the fires were small, a suspect described one as  “really big.”

With dozens of homes backing up to the park’s approximately 200 acres, Fire Department Senior Education Officer Kim Kosmas confirmed that even a spark from a spot fire could lead to conflagration able to spread into neighborhoods like North and South Tabor and Montavilla. Yet, in recent years, ranger resources have typically been allocated to high-crime parks elsewhere.

The unease that has returned to Mt. Tabor includes fear of copycat crimes and security lapses. Village Portland talked to multiple neighborhood advocates in phone interviews, park visits, and online about the fires.

In addition to potential threats to neighbors and visitors, the stately Doug Firs, cedars and sequoias in the park showcase the environmental urgency of protecting this gem of the Portland’s eastside.

“I still wake up at 3:30 a.m.” said Susan, a Tabor Parks Visitor Center volunteer. “I keep thinking I need to grab a fire extinguisher and go save the park.” 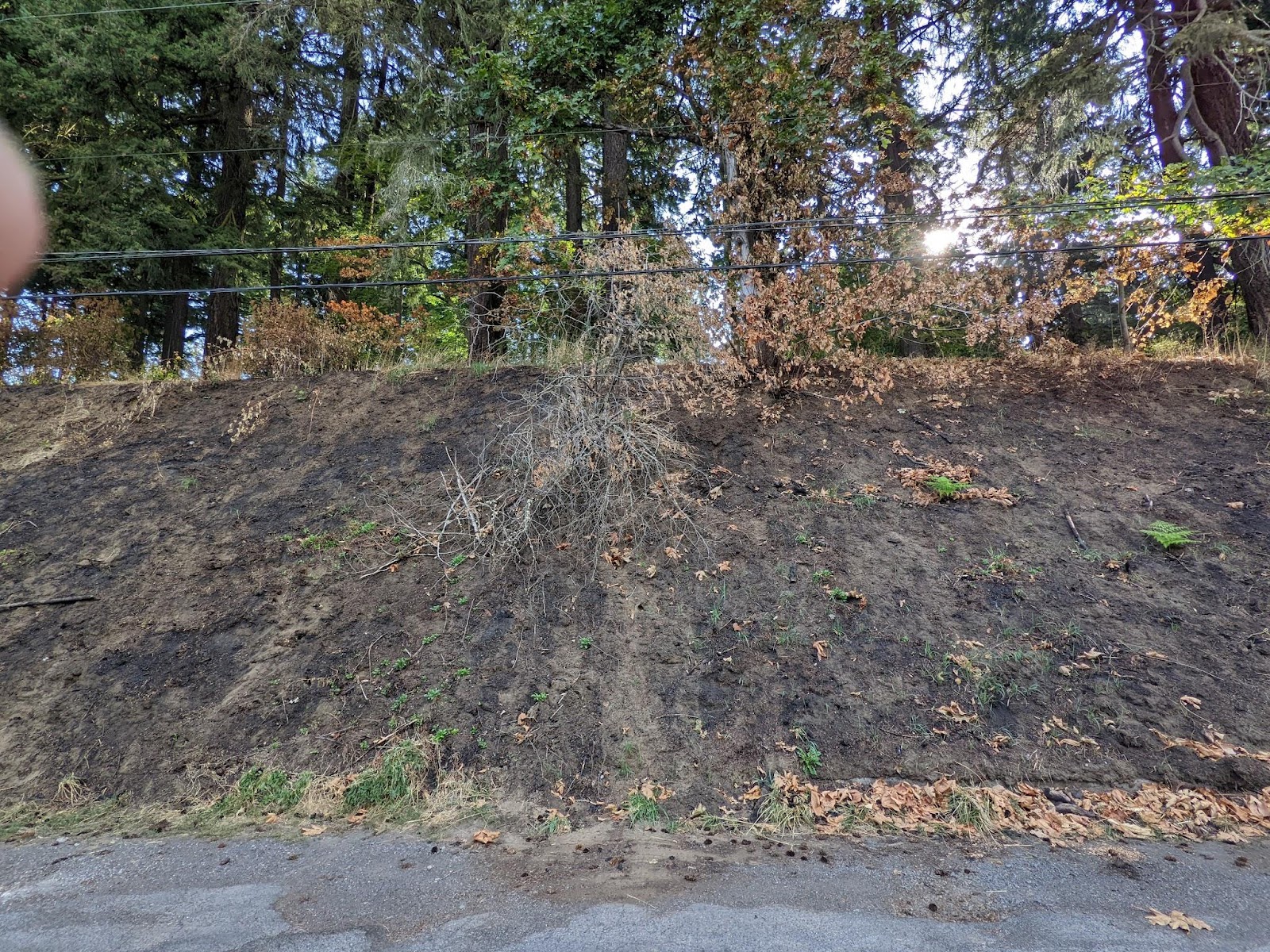 On the south side of Mt. Tabor, scorched earth can be seen.

“It’s crazy the teens were released without bail,” Laursen said. “They should be held accountable for life-threatening crimes.”

Others wondered if more severe restrictions would have been imposed had the suspects been Black.

Still another neighbor said, “This is why the city is in the mess it’s in.”

Andersen said the ongoing investigation could take substantial time to wrap up. “As with anything, there is always a risk when someone has been released. I would recommend the neighborhood stays vigilant and reports any new fire activity immediately,” he said.

For cold fires no longer burning call 503-823-FIRE. If fires are active, call 911. Residents with specific evidence can contact Andersen directly through the Fire Department.

The number of incendiary fires has exponentially increased over the last few years, Andersen continued. “My office lost three positions in 2013 and we struggle to regain them with each budget cycle.”

On the north side of Mt. Tabor, evidence of the a fire can be seen.

On the flanks of Mt. Tabor last month, flames that spread along a hillside across from a row of houses motivated neighbors to organize 24-hour safety patrols armed with shovels and water. Mobilizer “Katie,” who wishes to remain anonymous for fear of retaliation, confirmed that fear lingers.

“We see drug dealing, smoking, and personal assaults daily.” She added that she was verbally attacked even as she spoke with fire officials during the investigation.

Mt. Tabor Park is a treasured refuge visited by some one million Portlanders and tourists a year— but it is increasingly plagued with problems. Park rangers are scarce, maintenance has fallen behind, large crowds gather for unauthorized events, and the massive, empty reservoirs along 60th Avenue have been eyesores for more than a year.

For the Mt. Tabor Neighborhood Association which pulled together a capacity-crowd Emergency Zoom meeting with fire and park officials on the Sept. 9 eve of Red Flag warnings, more attention needs to be paid to this gem of the east side.

During the emergency meeting, Parks Health, Safety and Emergency Manager Vicente Harrison said limited personnel requires “triaging” resources, sending rangers where they are most needed. The expanded ranger patrols that had tripled during the active arson threat on Mt. Tabor are not permanent and will likely be redeployed elsewhere.

“Enjoy your park,” he urged. “The more eyes and ears in it, the fewer the opportunities for crime.”

An amphitheater hewn into the volcanic rock of Mt. Tabor Park.

Investigator Andersen admitted that community members raised the department’s awareness of the magnitude of the arsons. He praised residents for collecting evidence and thanked the Mt. Tabor NA for the quick-turnaround Zoom meeting.

The more reports officials receive, he said, the more effective the response.

Frustration remains widespread. Neighbors claim many warnings were ignored by park officials. Audrey Rose Goldfarb had been citing dangers since May in her Audreality podcast.

Controversial reports about giant wood piles was met with conflicting retorts from park officials about whether they were built as animal shelters, deliberately constructed bonfire pyres, or the result of wind.

By August, arson warnings hit KATU news. Anxiety mounted that coverage would trigger more fires lit by attention seekers. Neighbors were warned not to take buzz saws into the park. Distress increased that vigilance could turn into vigilantism or at least unsafe confrontations.

Friends of Mt. Tabor and MTNA board member Bing Wong worried about “good intentioned people taking it upon themselves to clean up the park without going through proper channels.”

For suspicious activity, he said contact parkscanpdx.org, unless it’s a 911 situation, Visitor questions can often be answered by volunteers at the Friends of Mt. Tabor Visitor Center near the caldera parking lot.

My own involvement came in a rush with the high wind Red Flag warnings. A Mt. Tabor Neighborhood Association board member asked me to contact fire and parks department officials. (Disclaimer: I am a frequent NA observer, but not on the volunteer board.) The Fire Department’s Kosmas agreed a community meeting was in order, and the MTNA immediately facilitated a Zoom. Those able to join heard that in addition to eminent arrests, actions would be expedited to secure gates and post prominent No Smoking signs.

At this writing, the signs are still not visible, and the gate near the Visitor Center remains broken. “Fixing the gates and keeping them locked when the park is closed is a critical deterrent to after-hour intruders and will help reduce opportunities for criminal activity,” wrote MTNA in an appeal to parks officials. 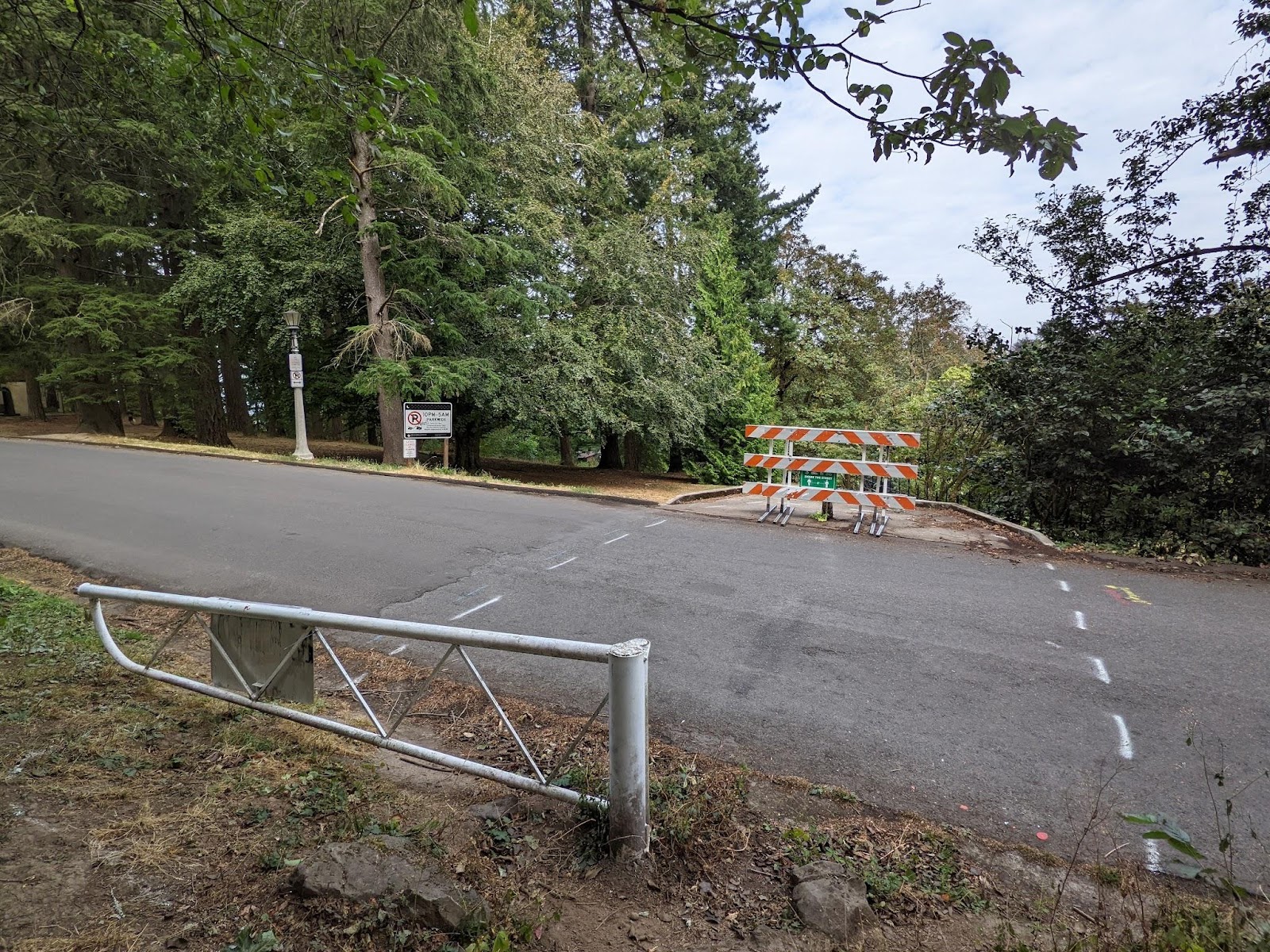 At a Friends of Tabor Park potluck on Sept. 12, members were told that the final gate fix was in the works. The hold up is apparently the delivery of specific parts.

The most visible evidence of neglect is the empty, dual former-reservoir basins along 60th Avenue. Once part of Portland’s storied water system, they were decommissioned seven years ago but required to continue holding water at historic levels. Instead, in violation of the City’s own regulations, they have baked in the sun for more than a year. The Water Bureau claims the basins are safety hazards because of leakage. The longer they sit exposed to the elements, the greater the repairs.

For months, The Mt. Tabor NA tried to raise the issue with the Water Bureau. Under persistent pressure from Laursen and a handful of MTNA representatives, the Bureau sought and received budget approval for a radar scope of one of the basins to look for voids and sources of leaks. After the scopes are done, repairs will be identified and a new line item will need to be added to the City budgets to hire outside contractors.

In the City that works, earliest estimates are that the historic landmarks will sit empty for at least another year.

Resident reactions to the ugliness are split. Some worry about the failure of the reservoir dams. Many suspect the City has an agenda to develop this valuable parkland integrated into view corridors by the architectural Olmsted family. Others consider the loss of water in the massive basins not only an eyesore, but waste of a potential water source that could be tapped in emergencies like fires.

The 30-some arsons on Mt. Tabor are hardly the only ones in the City or even in the neighborhood.

Nearby, the Western Seminary was site of several arsons a few months ago. To protect the property from further damage, officials tried to keep a lid on press coverage. It is well-known locally that a family of seven, including an infant, narrowly escaped from inside a campus cottage set on fire with an accelerant. At the newly renovated Armstrong Hall, fire, smoke and water damage kept the National Historic site closed for weeks.

MTNA will give follow-up reports on the arsons and threats of fire at its regularly scheduled monthly meetings, the third Wednesday of every month.

A reservoir at Mt. Tabor Park

2 thoughts on “(Not so little) Fires everywhere on Mt. Tabor”