Today, with the return of sunny weather and social distancing, it seems like more people than ever are riding bikes.

If you had been standing on Base Line Road (now SE Stark Street) on a summer weekend in 1900, you would probably have been amazed that the number of bicyclists. Multnomah County had just finished the Base Line Cycle Path, which was one of the most popular routes from Portland to the rural areas just beyond Montavilla.

What accounts for the bicycle’s popularity? Partly the thrill of riding fast and far. But also the availability of the new Safety bicycle and lower costs made cycling less dangerous and more affordable to many. A new Vanguard, for instance, in 1896 cost $85, but by 1898 you could get a mail-order Acme for $39.50.

The Morning Oregonian of January 1, 1895 called the bicycle “the great leveler”, putting “the poor man on a footing with the rich”. That may be so, but with the average worker earning less than $800 a year— and women, minorities, and laborers at the lower end— event the cheapest bike would have been a sizable investment for many.

The bicycle faddists wanted to head out of the city and into the countryside for fresh air, exercise, and scenery. Initially, however, most roads were poorly maintained and crowded with horse-drawn vehicles, whose drivers did not yield kindly to cyclists.

To solve this problem, bicycle organizations, particularly the United Wheelmen’s Association, advocated cycle paths to be built, as in other United States cities, along existing roads. Who would pay for them? The bicyclists who used the paths. They would pay a 25-cent yearly tax per bike.

Base Line Road, then a major county thoroughfare, was one of the routes selected. Perhaps because it was already so heavily traveled, Multnomah County decided to construct four-foot wide paths on either side of the road. They were completed from the Morrison Bridge to Montavilla by March, 1900 and were soon finished all the way to Gresham.

What it was like to ride the new Base Line Road path, you may wonder? Here’s what one reporter wrote in the Morning Oregonian of March 26, 1900:

“As the road is as level as any around Portland, and runs through a beautiful country, the route will no doubt be a favorite one. There is, to be sure, a stiff climb up the Mount Tabor hill, but there are no urgent reasons why the rider who is not inclined to exertion cannot get off and walk, and the view as the road swings around the north side of Mount Tabor is worth twice the climb. A dozen of the sinuous branches of Columbia Slough may be seen shining in the distance, the Peninsula country is spread before the rider, and closer at hand the cottages of Montavilla form a little city of themselves.“

This article was accompanied by a map showing the entire system of bicycle paths east of the Willamette River. 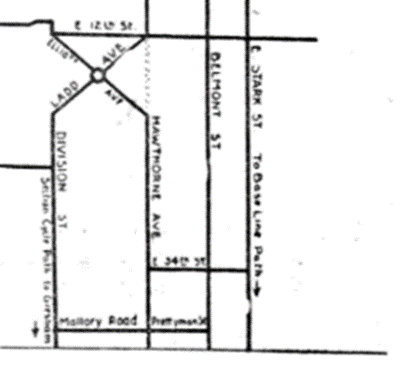 The Morning Oregonian of October 16, 1900 called the Base Line Road cycle path “the most popular and attractive drive out of Portland”.

But what did Montavillans think of those throngs of weekend bikers whisking through their peaceful community? What did they think of those athletic wheelwomen, some undoubtedly wearing the new, shockingly “masculine” attire, such as bloomers, knickerbockers, and divided skirts?

I can’t say what they thought of the controversial clothing, but some were definitely concerned about the dangers of bicycle traffic. In 1901, 80 residents signed a petition complaining about frequent accidents involving children. The County Court sided with the petitioners and ordered bicyclists to use the middle of Base Line, rather than pathways, for three blocks in Montavilla.

On the other hand, it seems likely that business owners who had food and drink to offer would welcome and benefit from the weekend bicyclists. We know from the September 17, 1899 Oregonian article on the bicycle trend that farmhouses and booths along Base Line Road were offering lunch and refreshments for bicyclists.

Several businesses located next to this bicycle path also stood to profit from the new traffic.

Take Mrs. Winnie A. Burdett, for example. She owned a confectionery store, located about where the Academy Theater is today. Surely many bicyclists would like to stop there for a sweet treat. It hardly seems coincidental that, just as the bike path through Montavilla was completed, Mrs. Burdett announced plans to put up a summer garden and refreshment house on her property (Morning Oregonian, April 9, 1900).

Mrs. Burdett’s neighbor, Captain Herman Schneider, who operated a saloon at the corner of Base Line and Hibbard Street (now SE 80th Avenue), probably also enjoyed an uptick in business.

This may have also prompted him to open a beer garden next to his tavern in 1902. In the grand opening announcement, he called it Schneider’s Family Garden.

Diagonally across from Schneider’s saloon, was the Five-Mile Roadhouse, owned by William Grimes, Schneider’s arch-rival. He, too, may have benefited from the weekend bicyclists, although his tavern did have a certain reputation for rowdiness. (For more on the rivalry between Schneider and Grimes, see the Montavilla Memories story “How Montavilla went ‘dry’ or the tale of two saloons”).

Grocery store owners A. B. Horton and C. F. Weibusch on Base Line Road at that time also likely saw increased sales.

Since the Base Line Bicycle Path was built as the bicycle craze was fading, this boost to Montavilla business would have been short-lived. Fewer bicyclists meant fewer paying the bicycle tax, so maintenance began to slip.

In 1903, the Base Line path was still one of the most used, even though it had not been repaired for a year. By 1906, Portland cycle paths, in general, were disappearing. The Base Line Road path perhaps continued a little longer, but it is no longer mentioned in newspaper accounts after 1908.

Many Montavillans were probably happy to see the weekend bicyclists go, but soon enough a new, even faster vehicle would appear.

In October, 1902, an auto traveling 35 miles per hour in Montavilla prompted locals to ask the Oregon legislature to impose speed limits on county roads. But that’s a story for another day.

One thought on “The bicycle craze comes to Montavilla”