I dreamed last night that movie shows
were banished from the earth….
It was a scream that broke my dream and brought me to my feet—
My little boy with shouts of joy had
raced in from the street:
‘Twas time to go! The movie show is
but two blocks away.
I’m glad it’s near, with harmless cheer
to close the workman’s day.

With our movie theaters locked down for months due to the covid pandemic, I suspect we can all identify with Grace E. Hall’s poem, which celebrates the pleasure of going to a movie in your own neighborhood. Montavilla has been fortunate to have one or more local theaters for most years since the era of silent movies began.

While we’re waiting for the Academy Theater to re-open, how about a trip down memory lane to explore Montavilla’s historic movie houses?

Films became America’s favorite pastime as motion-picture technology improved and as dedicated movie theaters appeared across the country in the early 20th Century.

Portland’s first movie theater, the Nickelodeon, opened downtown in 1905. (Nickelodeon was also a generic term for the earliest theaters since they charged only a nickel.) Soon, additional movie houses were established not only downtown, but also in the neighborhoods. By 1910, Portland could boast of 30 theaters and by 1915 of 70.

Montavilla’s two earliest movie theaters date from the nickelodeon heyday: the Scenic, built in 1910 and operated until at least 1918. The Idle Hour, built in 1911 and closed in 1915. Both theaters were housed in multi-purpose commercial buildings.

The Scenic occupied the ground floor of the two-story structure that still stands at the northwest corner of NE Stark and NE 79th Avenues (7831 SE Stark St.). Today the building is home to Celestial Awakenings and Yoga Refuge. 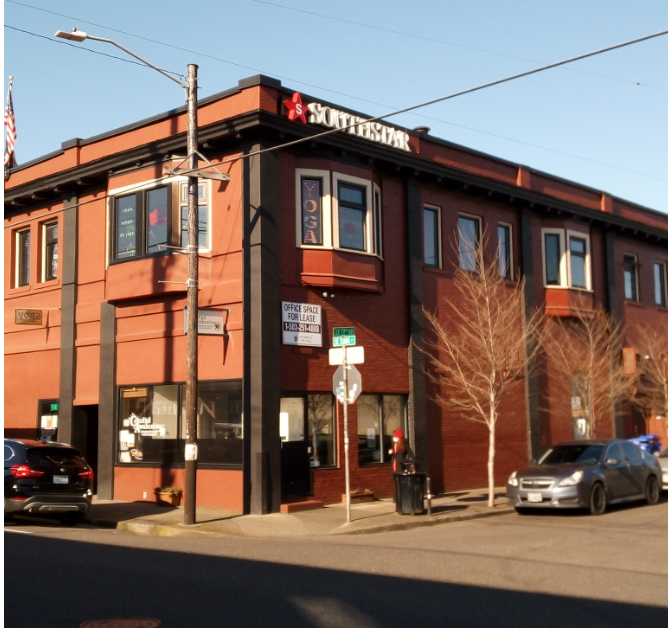 The Idle Hour was located at NE Stark and NE 81st Avenues, in the building that is now the south portion of Milwaukee Lumber. 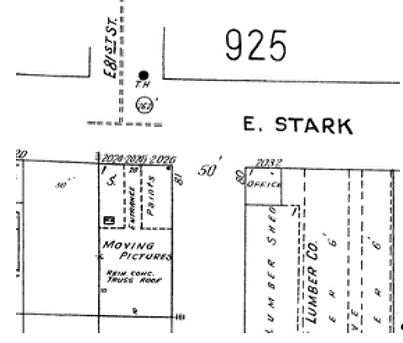 Sanborn Map, 1924 showing the location of the Idle Hour and later the Villa Theatre. The theater entrance is between two shops on Stark Street. The theater itself is where you enter from Milwaukie Lumber.

The Scenic Theatre building was commissioned by Russellville fruit-grower William E. Lewis (1864 – 1940). The Oregonian of July 3, 1910 described the $15,000 structure as Montavilla’s first brick building and as an example of the neighborhood’s current building boom. (Ironically, the following day, July 4, the commercial buildings on Stark between 79th and 80th burned to the ground, including the largest one owned by W. E. Lewis’s brother Leander. (The fire added urgency to Montavilla’s efforts to persuade the City to build a nearby fire station. For more on this fire house see this Montavilla Memories story. 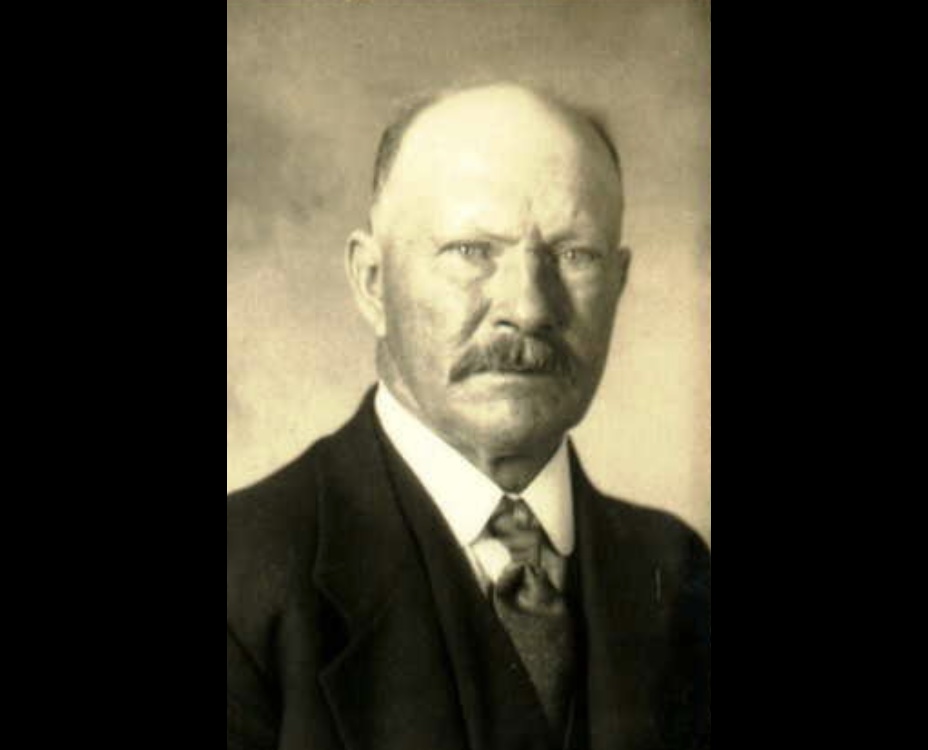 Silent films were typically accompanied by music, live music provided by either pianos, organs or even entire orchestras. The Scenic’s first manager, Frank Dietzman (1883-1957), however, installed a piano orchestrion (or orchestra piano) in 1911.

An orchestrion was a mechinical music maker— similar to a player piano. But it made the sounds of several instruments instead of just one. Perforated paper cylinders created the tunes and were removable to change the musical score as desired. The orchestrion’s piano keyboard could also be played by a live musician. To see and hear an orchestrion go to this link. 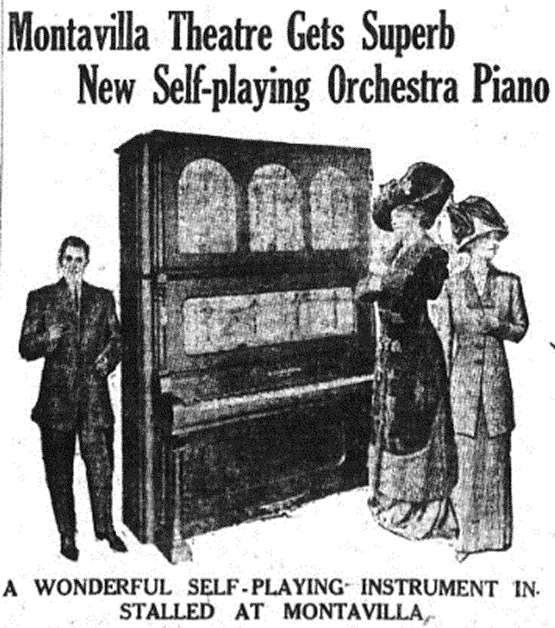 Silent movies in those days were screened as separate episodes, each consisting of a single reel. Viewers could also expect a live act or two. Earlier, films were a minor feature of vaudeville programs. The combination of movies and live entertainment would continue for many years.

We can get a sense of typical movie theater programming at the Scenic Theatre because of weekly ads published in the The Montavilla Sun. This was a short-lived weekly newspaper that existed from March 26 through June 18, 1915. By this time, theater owner W. E. Lewis was also managing the Scenic. 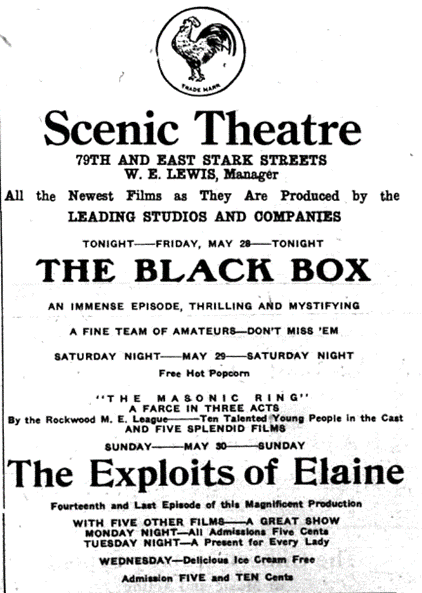 The May 28, 1915 ad lists the weekly schedule, programming for Friday through Wednesday. This included popular movies and, on Saturday, a short, farcical play performed by a local Methodist Episcopalian youth group. There was even free popcorn. Lewis was also drumming up business with five-cent admission days, gifts, and free ice cream.

From other Montavilla Times ads, we know that besides cliffhanging dramas, the Scenic also showed comedies such as Cecil B. DeMille’s “The Ghost Breakers,” one of many films of the popular haunted-house genre.

Although movies were popular, not everyone approved of this new form of entertainment. Mothers and religious leaders, in particular, were nervous about the potential impact of movies on the physical and moral health of children.

There were, in fact, some real dangers. Diseases could be spread in crowded theaters and in 1914 Montavilla theaters were closed for fumigation after a diphtheria outbreak. Fires were also common because of the flammable nitrate film.

Another fear was children becoming delinquents by viewing movies that about violent crimes and robberies. Some movements were considered a bit too provocative.

To deal with such perceived problems, in 1914 Portland created a Board of Censors tasked with reviewing and certifying movies. Nevertheless crime and violence continued even in permitted movies, including those shown at the Scenic. “The Exploits of Elaine” (1914), for example, involved kidnapping and attempted murder. “The Black Box” (1915) is about a murder investigated by uber-detective Sanford Quest. 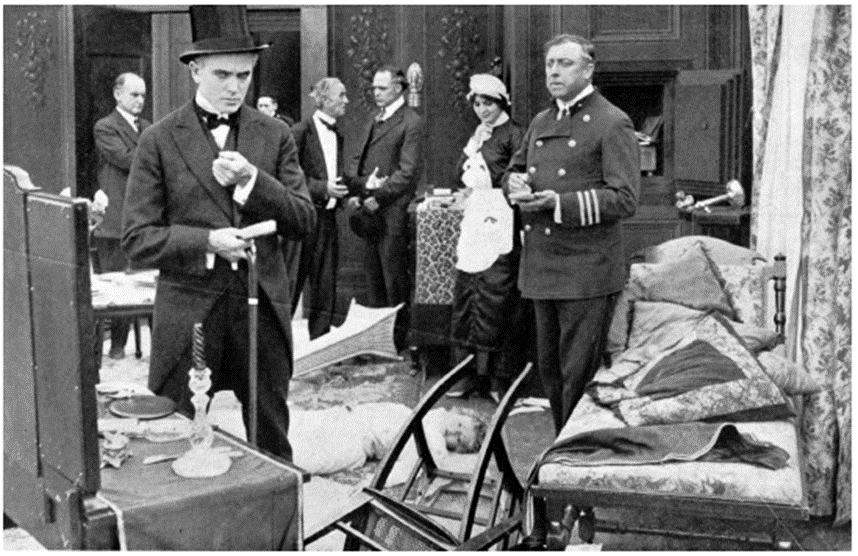 “Sanford Quest is called upon to clear the mystery of the murder of Lord Ashleigh’s daughter”, a scene from “The Black Box”.

“The Black Box” is lost, but you can see a sample of “The Exploits of Elaine” here.

If only there were more ads for the Scenic. Then we’d know if that theater screened movies starring Jewel Carmen (stage name for Florence Lavina or Vinia Quick, 1897 – 1984), described by Portland newspapers as a “Montavilla belle.” 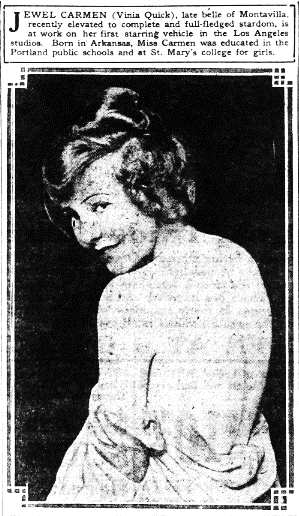 “Jewel Carmen (Vinia Quick), late belle of Montavilla”. Photo for her starring role in “The Girl with the Champagne Eyes” (Fox Film, 1918).

The Quick family lived at 61st Avenue and Flanders Street, then considered to be within the bounds of Montavilla. By 1912, the family was living in Los Angeles, and Vinia, age 14, was about to embark on a film career.

She became a leading lady for Douglas Fairbanks in movies like “American Aristocracy” (1916). She also featured in Frank Lloyd’s “A Tale of Two Cities” (1917) and “Les Miserables” (1917). Her first starring role was Nellie Proctor in “The Girl with the Champagne Eyes” (1918), set in an Alaskan mining town. She played her last leading role in “The Bat,” a comic-horror film of 1926.

Incidentally, if you Google search “Jewel Carmen” you’ll find several of her movies on YouTube.

The Scenic Theatre is also the likely meeting place for the Montavilla Mission congregation before it established its own Shiloh Baptist Church. For more on this church see this Montavilla Memories story.

And then there were movies that spoke to current social concerns. On April 3, 1915, for example, the Scenic showed Siegmund Lubin’s six-reel film “The Drug Terror” (1914), a drama about the narcotics trade, which dove-tailed with the current anti-drug campaign.

Probably because of the public concern, “The Drug Terror” proved to be very popular. When shown downtown at the National Theater, owner, Melvin G. Winstock expected to be criticized for showing it (Oregonian, March 18, 1915). However, when it opened on March 21, thousands were turned away and it was held over for three more days. Two weeks later, it was at the Scenic. 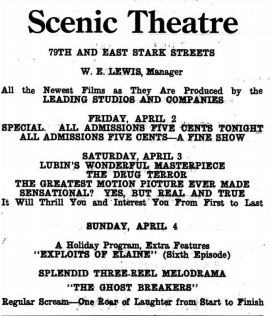 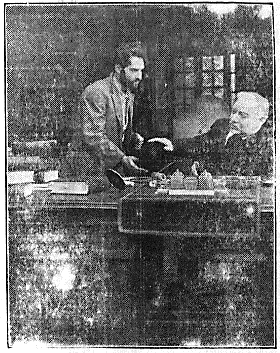 Still from “The Drug Terror”

During World War I, the number of movie theaters declined. From 70 in 1915 to 42 in 1918. In the early 1920s, silent movies reappeared in Montavilla. The old Idle Hour theater building reopened as the Victory Theatre in 1923, changing its name in 1924 to the Villa Theater (using a popular nickname for Montavilla), and finally and briefly in 1929 to the Tokay.

Besides a succession of names, this troubled theater had a series of owners— five in all— during its short life. Among these was Jacob C. Shaver, a photographer from Baker City, who planned to make movies of Montavilla and show them one or two nights a week. He had a laboratory for producing film.

Did he actually make any and, if so, did any survive? That I do not know, but what a treat it would be to view footage of Montavilla from the 1920s!

A name change and upgrades to meet City requirements did not save the Tokay. The very year the Tokay died, its rival Montavilla theater, the Granada, began showing the “talkies” in April, 1929. That marks a new era, a story to be taken up in the next article on Montavilla’s movie theaters.