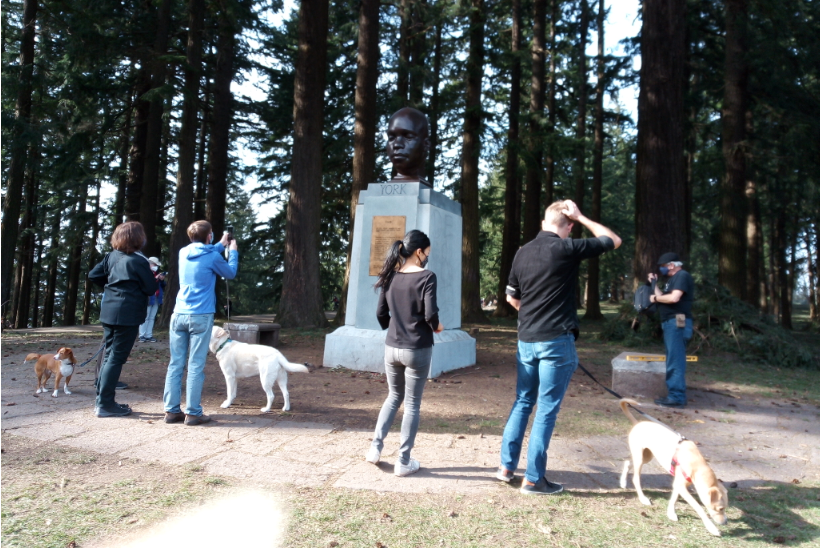 I don’t usually write about topics not directly related to the Montavilla neighborhood. But something so interesting recently happened in our nearest big park that, as an art historian, I could not resist writing about it.

Besides, the history of Montavilla and Mt. Tabor are closely connected, from the origin of our neighborhood’s name— Mount Tabor Villa Addition— to our use of Mt. Tabor Park from the time it opened in 1909.

Most of you probably know about or have seen the York sculpture mysteriously placed in Mt. Tabor Park the night of February 19 – 20. The York incident has attracted publicity, literally, from coast to coast, raising the sculpture’s profile to a level that surely would have astonished the historical York (c. 1770 – ????).

The sculpture is an homage to an enslaved man who was an integral member of the Lewis and Clark Expedition, which lasted from 1804 to 1806. He, like his father, bore the single name York.

The sculpture of York is approximately four feet high and appears to be made of bronze. But since it was lifted over a locked park gate, carried up a steep grade, and hoisted on to a 9.5-foot plinth, a lighter-weight material, such as a resin, seems more likely. The anonymous local artist who made the bust told Artnet News reporter Sarah Cascone that he worked with only a small team and that they installed it “in roughly an hour.” (See the link to the Cascone article below.)

Rather than repeat everything else that has been written about “York”, I will focus mainly on three ways of looking at it within the context of public art today. 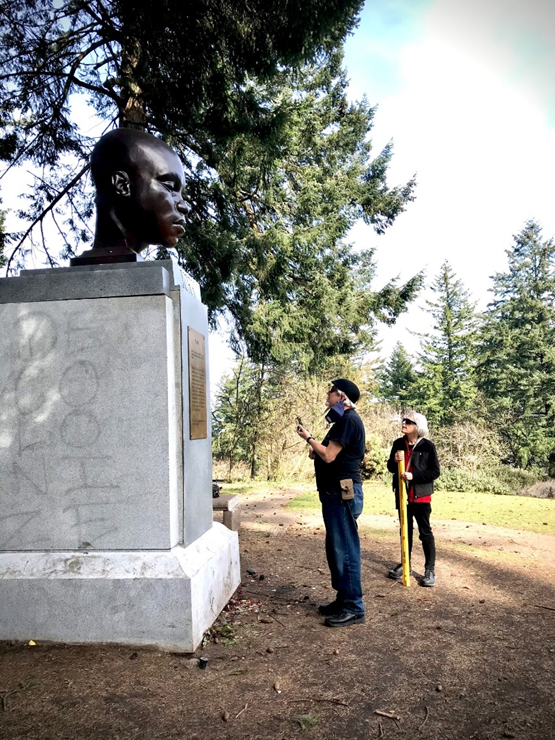 “York” mounted on a 9.5-foot plinth that once held the statue of Harvey W. Scott.

York was installed on the pedestal previously occupied by the bronze statue of The Oregonian editor Harvey W. Scott (1838 – 1910), which was toppled and damaged by persons unknown on October 20, 2020, exactly four months before it was replaced by York.

An enslaved Black man replaces white authority figure: reversing traditions of who is remembered and commemorated. An act questioning bias in the public record and public art.

The sculpted head of a strong, thirty-ish, brooding Black male, perhaps pondering his own historical contributions, his self-worth— all questions now part of a heightened national conversation about racial inequality.

York’s creator— a white man who wishes to remain anonymous, for now— states his intent in the
Cascone interview. His work “’pays homage to York at a time when we all need to remember the
important role that African Americans have played in our history and reflect on the tragedy of slavery— a tragedy that continues to echo.’”

But the artist’s idea of representing York did not arise with the post-George Floyd anti-racist dialog. In 2010, he was inspired to make an initial, smaller head after reading Darrell Millner’s book “York of the Corps of Discovery”. (A photograph of the artist’s studio in the Cascone article seems to show both sculpted heads.)

The York head’s replacement of the Scott statue draws attention to an important, but long minimized historical person through its over-life-size scale, the incised name in classical font, and the biographical plaque. 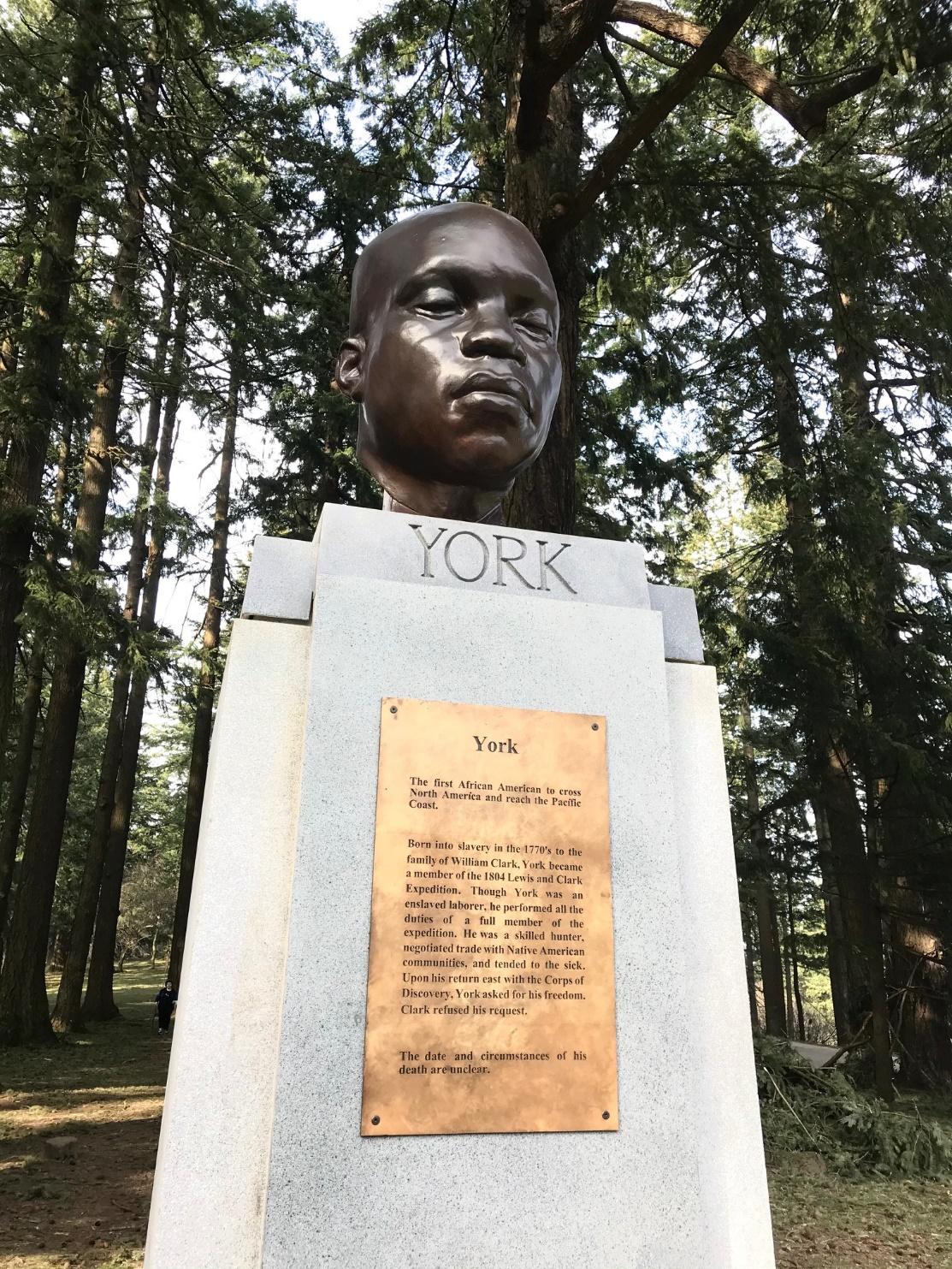 Both Scott and York were, of course, important to Portland and American history, however Scott was prominent during and after his lifetime. York was not. In fact, York wasn’t even a free man until some ten years after the Lewis and Clark Expedition and his later years remain a mystery. Even his date of death is unknown.

Interestingly, the two sculptural occupants of the Mt. Tabor pedestal bear a connection to the Lewis and Clark Expedition. But here their historical importance is reversed. Scott was president of Portland’s 1905 Lewis and Clark Exposition that celebrated the expedition 100 years after the fact. York was, of course, a fully-contributing member to the expedition itself.

The Mt. Tabor York is part of a larger effort by historians, artists, and others to tell the fullest story possible of the man, to correct previous inadequate or biased accounts and to disseminate the narrative of the only Black man on President Thomas Jefferson’s Corps of Discovery.

The re-evaluation of the York story marks a shift in perspective from the emphasis on European-American heroes, like Meriwether Lewis and William Clark, to a more accurate and inclusive view of American history. The work of revelating the true York has been intense over the last 35 years. The WorldCat website, which indicates the locations of library holdings, makes this clear. Here I found seven pages of listings for books (both adult and juvenile), articles, videos, poetry, even a play and an opera about York.

Art has also played a role in bringing the story of York to life and to light. The sculpture in Mt. Tabor Park is but one of a number of representations around the country. In Portland alone, I’ve located four, listed below in chronological order:

* Isaka Shamsud-Din’s 1983 “Bilalian Odyssey” mural (now in the south wing of the Oregon Convention Center) features York as a large, central figure among depictions of various other Blacks from the history of the West.

* Michael Florin Dente’s “Naming of Mt. Jefferson” (1988) is a bronze sculptural group of York, William Clark and an anonymous Native American. This was previously located on the University of Portland campus at a spot approximately where York and Clark once stood to survey the Willamette River and the distant Mt. Jefferson. Because of potential vandalism, the sculpture was removed in June, 2020. Read more here.

In the case of the statue of Harvey W. Scott, the decision was made by Scott’s descendants and the city of Portland. The Scott family commissioned sculptor Gutzon Borglum (1867-1941)— then still working on his monumental presidential heads on Mount Rushmore in the Black Hills of South Dakota— to create the statue. The family donated the statue to the City of Portland, which allocated a space for it on the summit of Mt. Tabor Park. It was installed in 1931 and dedicated in 1933. 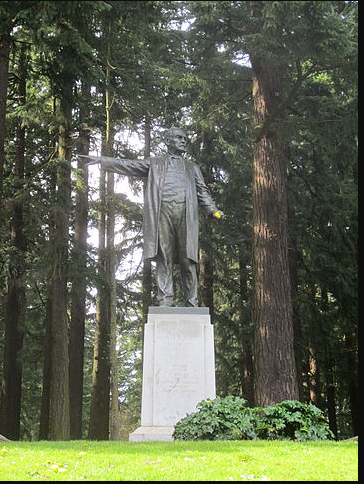 In the case of the York head, the decision was made, as far as we know, solely by the artist, without prior permission from Portland Parks & Recreation. The removal of the Scott sculpture was also an anonymous, unilateral action.

Presumably the York artist never intended it to remain permanently. And PP&R decided to allow it to stay “for the time being” based on parks policy. Memorials are permitted in Portland parks as long as they do not “impact public safety, public property, access, or permitted events”. See the full statement of this policy here.

Although PP&R retroactively granted temporary permission, not everyone thinks “guerilla” art is okay. Kerry Tymchuk, executive director of the Oregon Historical Society, is one. He told Alan Yuhas of the New York Times that “’It can’t just be free game for anybody to take a statue down or put a statue up— it’s an invitation for chaos… What if they had put somebody else up besides York?’”.

However, Tymchuk also sees a positive a positive side. He stated in a KGW News interview that “anytime people are talking about history, it’s a good thing, because it’s a fascinating topic.” See the article here.

Courtney Wilton, former chief financial officer for Energy Trust of Oregon, thinks the public should decide about a replacement for the Scott statue. The toppling of statues, he writes, “substitutes deliberation with mob rule”—surely a sensitive issue at this very moment in American civic life.

Wilton believes the Scott statue should not be returned, agreeing that “it’s time to honor someone else.” In his opinion, a representation of York would be “a worthy successor.” Yet he thinks the city should remove the York sculpture and create a process for deciding on a replacement for Scott. (See the link to Wilton’s full statement below.)

For Commissioner Carmen Rubio, York brings attention to the need for greater recognition of the contributions of the BIPoC communities to Portland. To make that happen, there should be a more inclusive process for making policies about public art. The city government, she says, has “many processes [that] exclude community participation and discourage engagement.” See the full press release here.

As you can see, this is a complicated issue with diverse points of view and implications. I find my own opinion mixed. It is a beautiful, skillfully made work and it has opened a useful discussion about history and public art— who and what should be commemorated, the need for a more accurate and inclusive history, the need for a broader involvement in public art decision-making, the role public art can play in civic discourse.

The City of Chicago sets an example of how to have a meaningful public dialog about historical sculptures and whether they should be replaced, retired or recontextualized. In the wake of protestors attempting to bring down a statue of Christopher Columbus, Chicago Mayor Lori Lightfoot formed a committee to review the city’s 500 public artworks and memorials. The committee initially identified 41 monuments for public reconsideration on the basis of racism, exclusivity, etc. The Chicago public has been invited to review the artworks. For more information on the Chicago project see the project’s website here.

Now, in Montavilla, public art is pretty sparse, but maybe someday we’ll have more and it will be selected through a public dialog to celebrate the neighborhood’s diversity. Just maybe. Murals anyone?

Sarah Cascone, “A Mystery Artist Installed a Much-Discussed Statue of an Enslaved 19th-Century
Explorer in Portland. He Tells Us Why—and How—He Did It,” Artnet News

Note:
Multnomah Public Library has nine books on York (including four for children). To find them search for
“York, approximately 1775 – approximately 1815.”

4 thoughts on “Some musings on the York sculpture in Mt. Tabor Park”