By MIDGE PIERCE aka “Auntie M.” this time of year 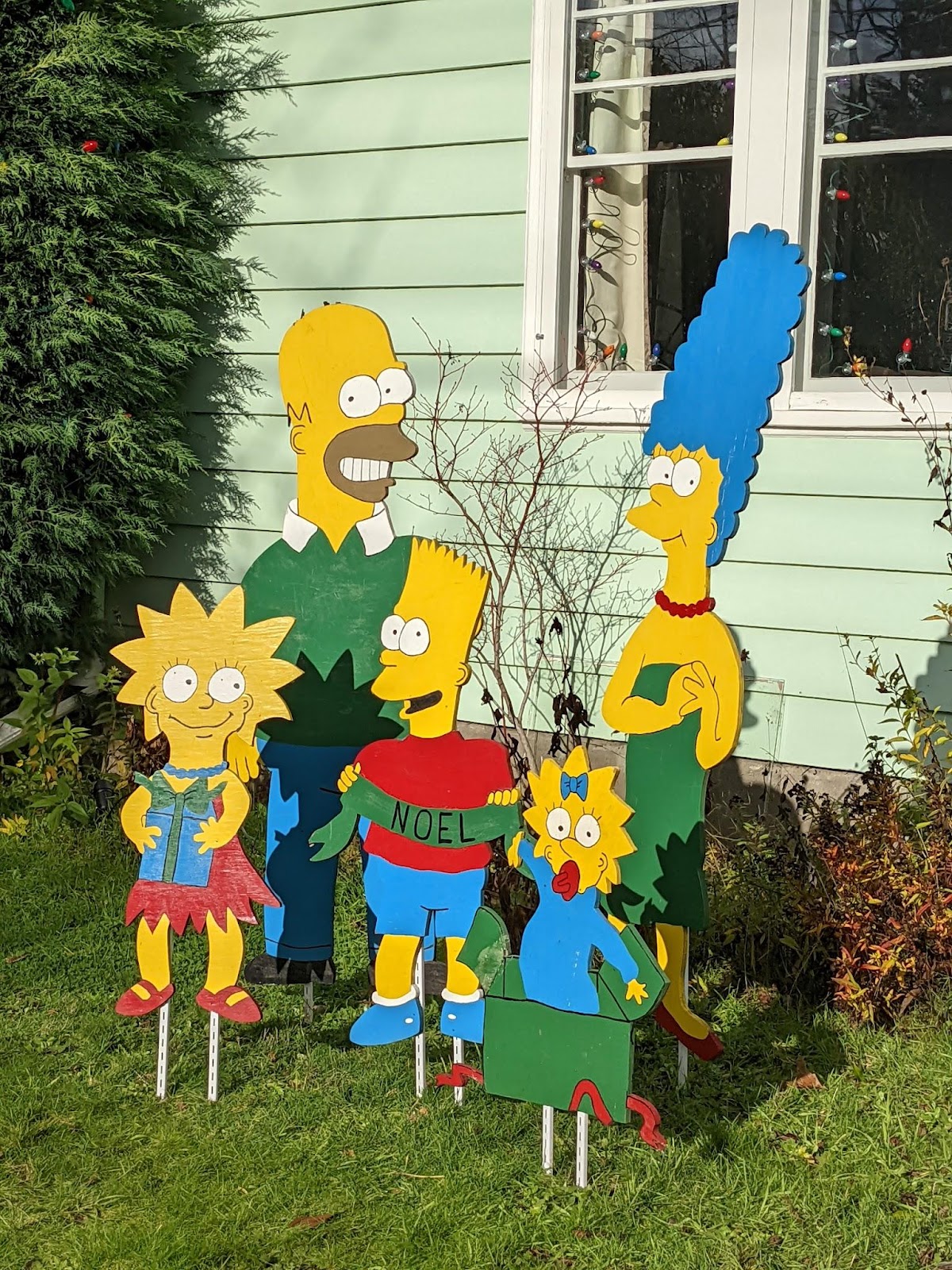 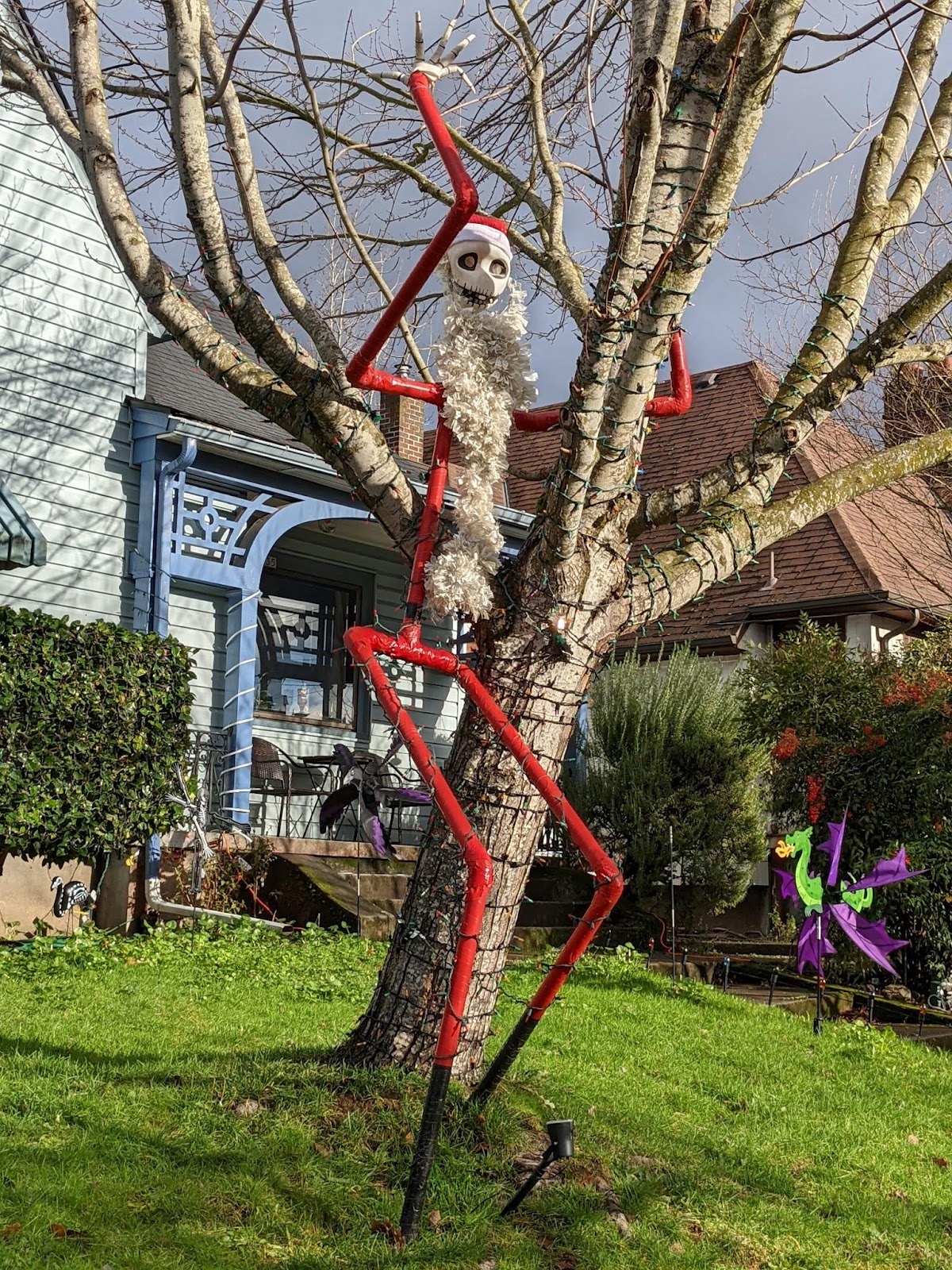 ‘Twas the night before Christmas (Kwanzaa and Festivus) and all through the town,

Stockings were hung by some fence posts with care,

In hopes a Safe Rest Village soon would be there.

And bundled in kerchiefs or beneath tent flaps,

When what to our wondering eyes should appear,

Yes Portopia, there is a Santa— or at least that silicone Santa clone regiment if you can find it. Yep, it’s been another year for the bookish. So take note enroute to the library. Or better yet grab your N95 mask. Apocalypse 2.0 is about to become three.

Sure, we endured 2021. We’re proud Portopians— my preferred personal noun for fellow residents— who held fast to ideals, rescue dogs, pajamas, clutter, and the COVID-19. Our countertop computer stations cozied up to cookie jars. We Zoomed with kids squirming on our worn-out sweat-panted laps with pets suffering separation anxiety. Unwashed hair uncombed, we hit video off.

The endless wakefulness of wokefulness wore down our vanity, humanity, and disease-resistant immunity even as variants ravaged the Greek alphabet. Yet, we finally booked boosters in expectation that time, which stood still in social isolation, would not outrun procrastination.

The deep pulse of Portopia’s pandemic forced reflection about our city, its challenges and, despite polarity chilly as the North Pole, each other. When contagion is over and Austin surpasses Portopia for weird, what will still make us special is our people, especially those who stay here to rescue Rose City’s reputation.

To that end, Village Portland wants to know what can make you still love living here. In return, we’ll upload the best of your bests during the coming year. Meanwhile, with tidings of comfort and cheeky joy, we offer a few favorite things of our own: 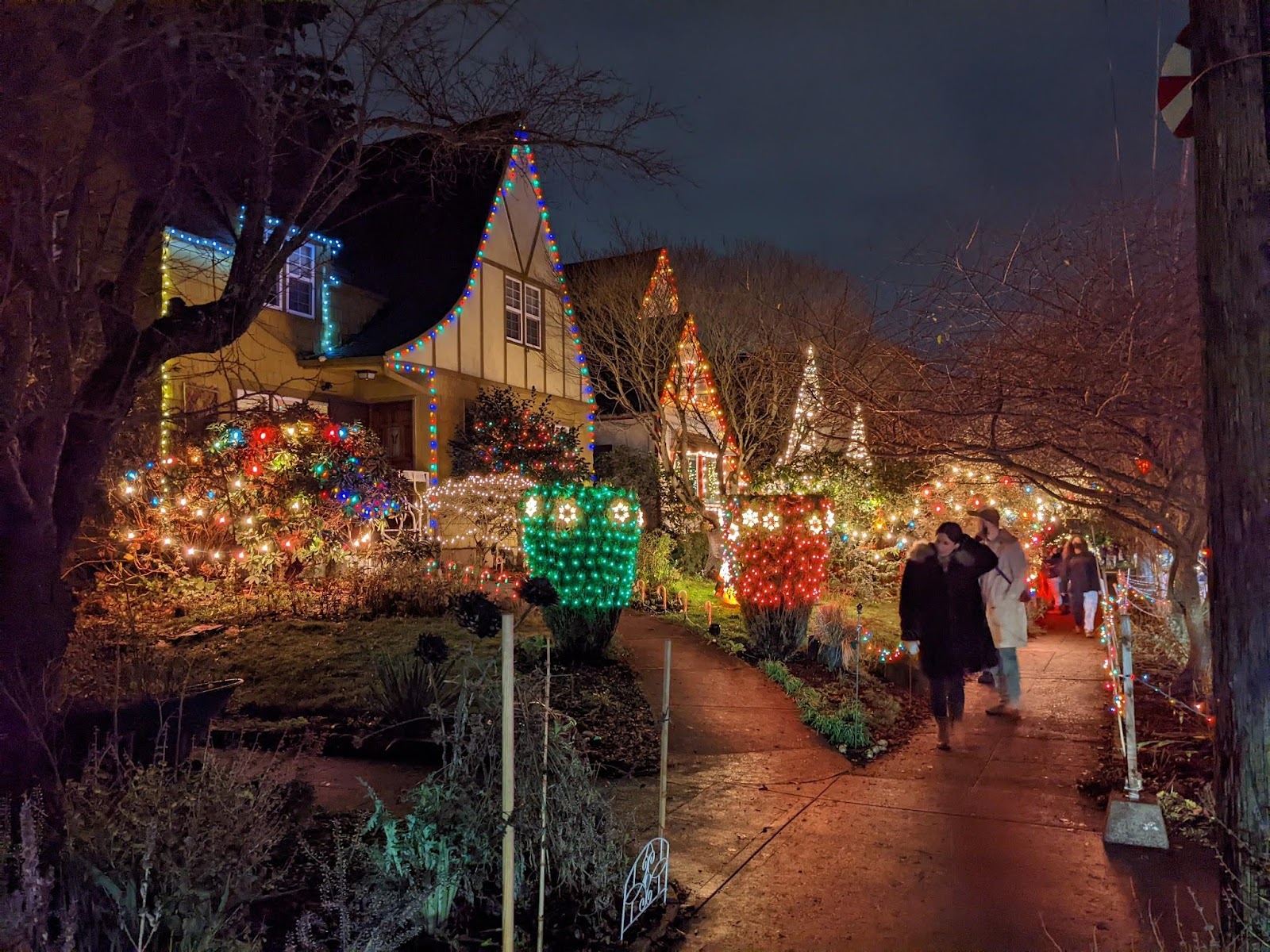 Nobody does Holidaying Better! Not even the Delta varient dimmed Portopia’s colorful Fall pumpkin patches, zombie paintballs, scare grounds, or the Timbers Army. Early in December, dreidels spun to mark Hanukkah’s Festival of Lights. Before Omicron was a flicker in our predictably too-early Christmas preparations, we decked our still-Halloween adorned halls and drought-stricken Charlie Brown trees.

Somewhere, Wiccans celebrated Solstice with coins for good luck, evergreens to honor the Earth, and sourbread dough for the hereafter. 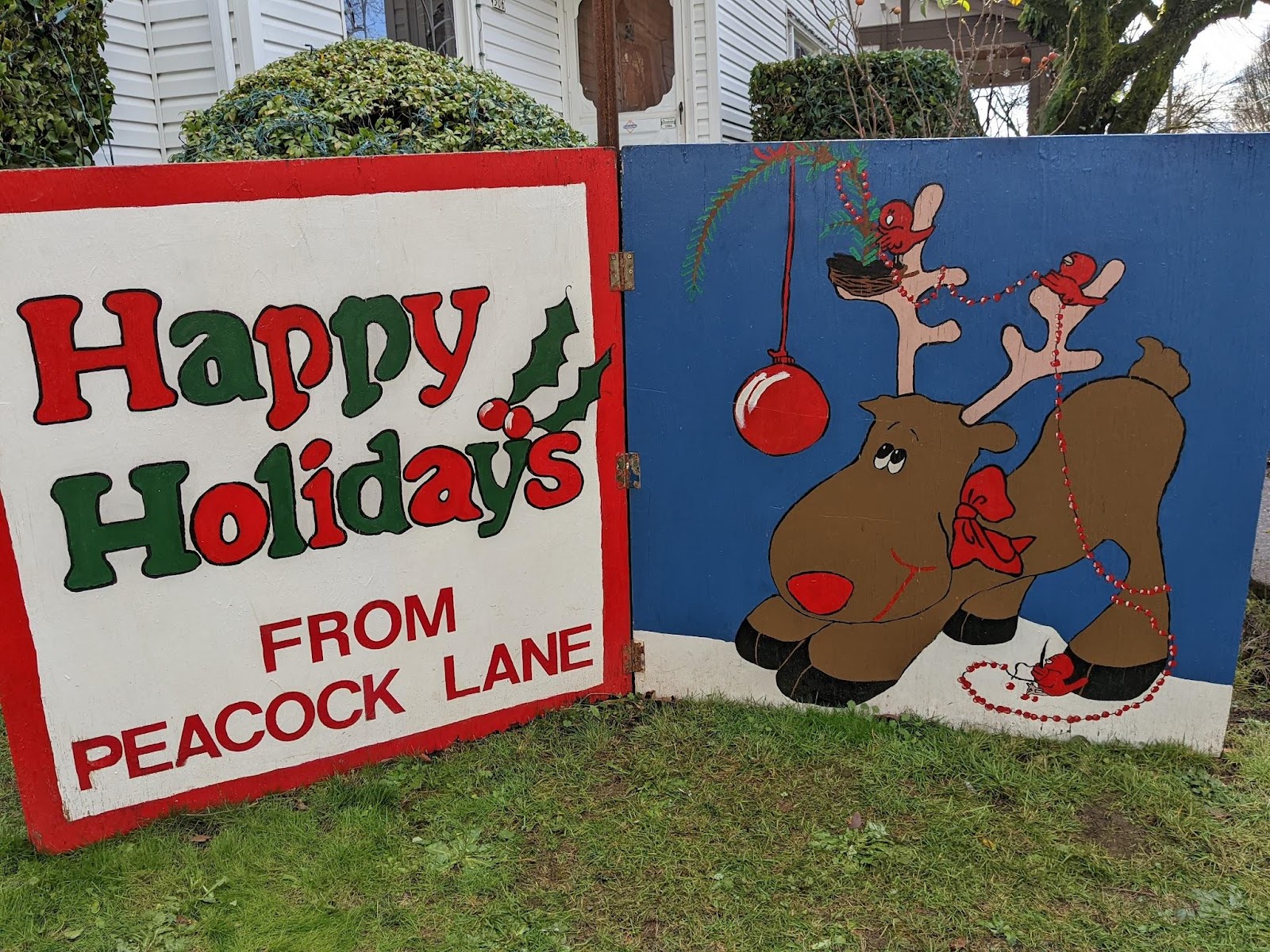 In 2021, Portopia’s merry Christmas Street came back! Umbrella-less pedestrians packed rainsoaked Peacock Lane (and Walgreens, of course) sidestepping carolers and— new this year— dodging cars! Portopians with contact highs and dilated pupils bogarted the sidewalk by a Death Star display. Others yearned for the Seussations of yore.

Still others stood frozen by awe for the fortitude required for 15-days of hopped-up strangers trampling tidy, gable-cottaged lawns. Even the notorious “infill” house that prompted the Lane’s national historic designation got into the spirit with lights strung strategically to shrink its disproportionate silhouette down to size. 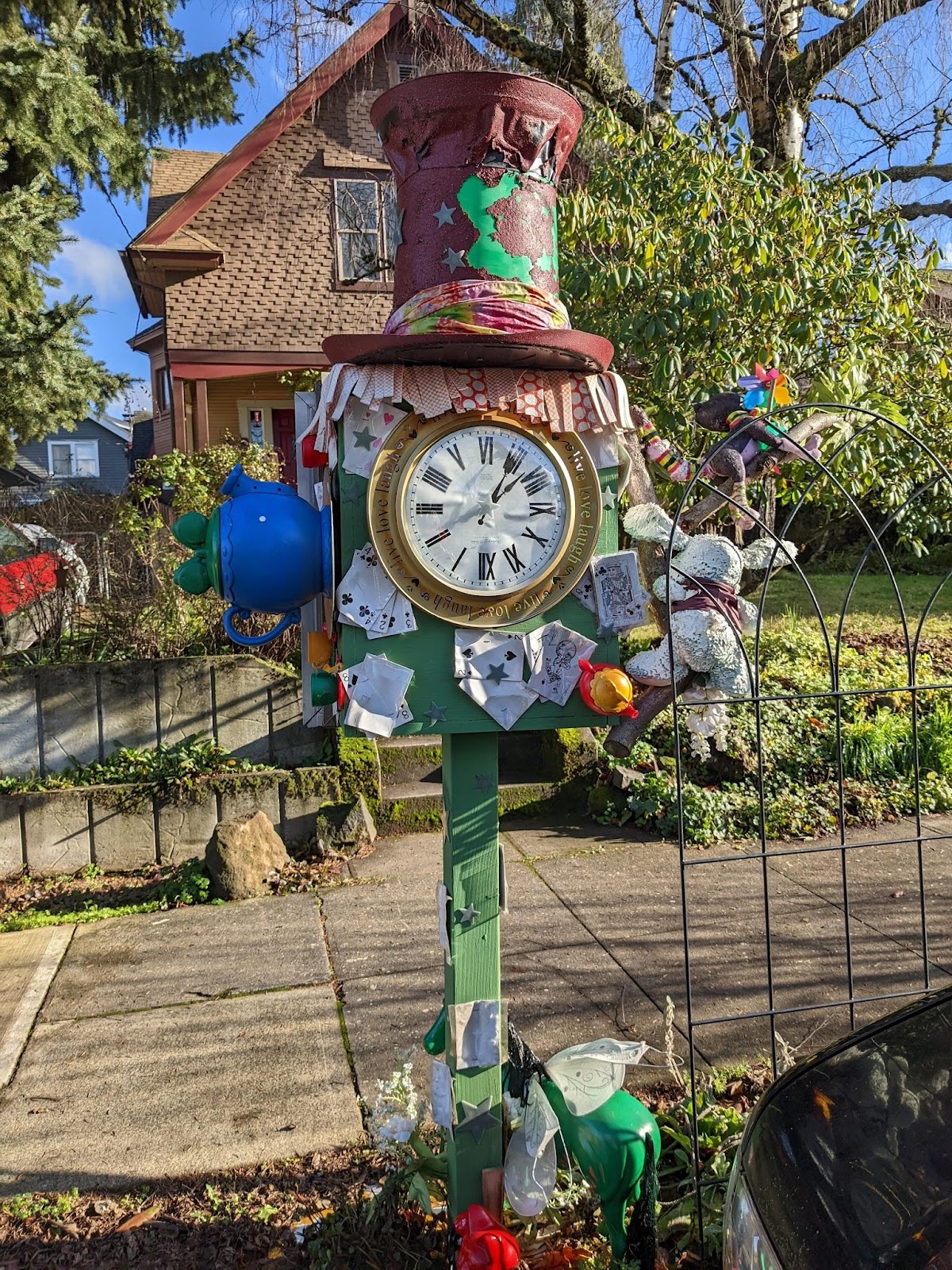 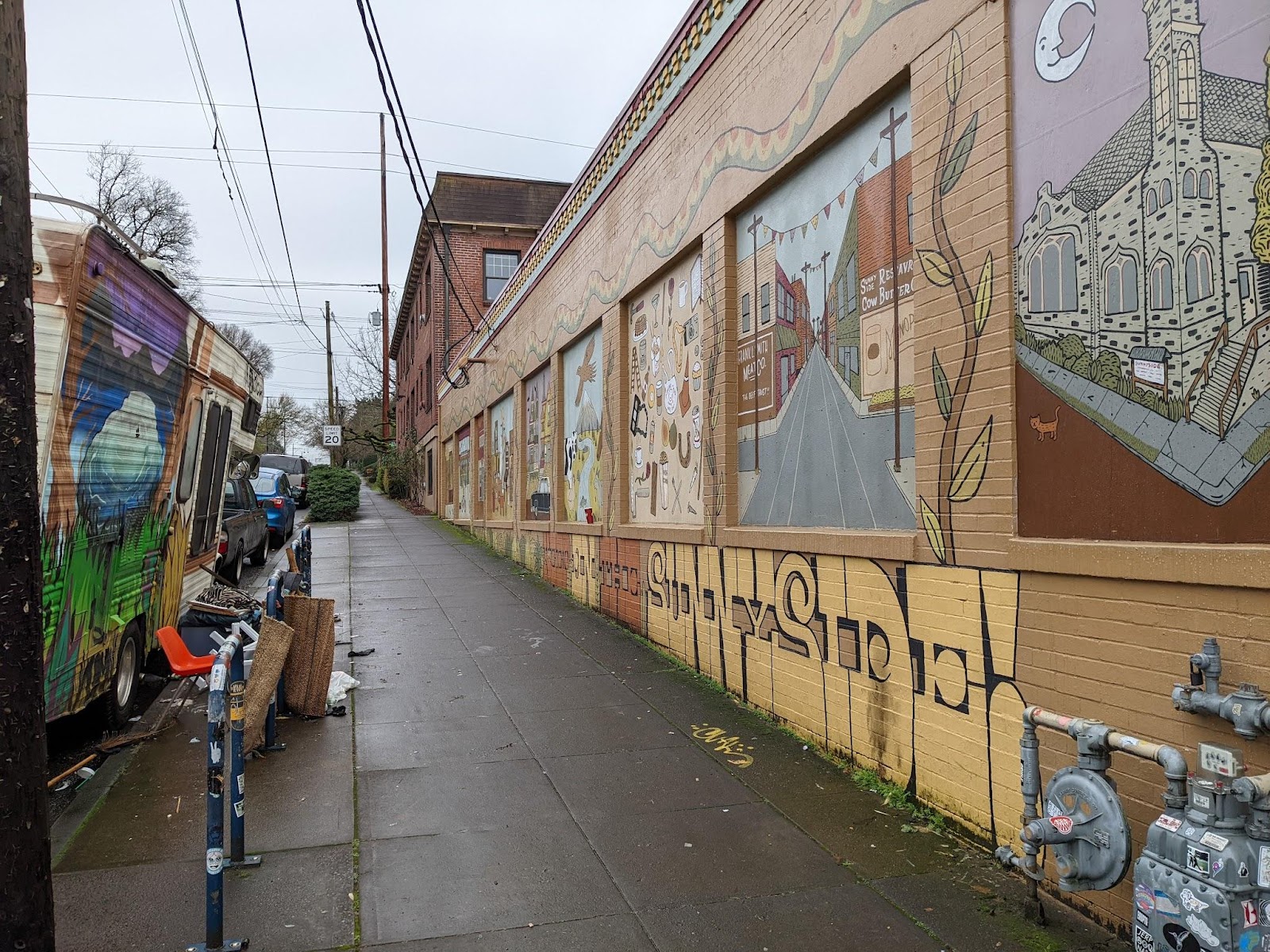 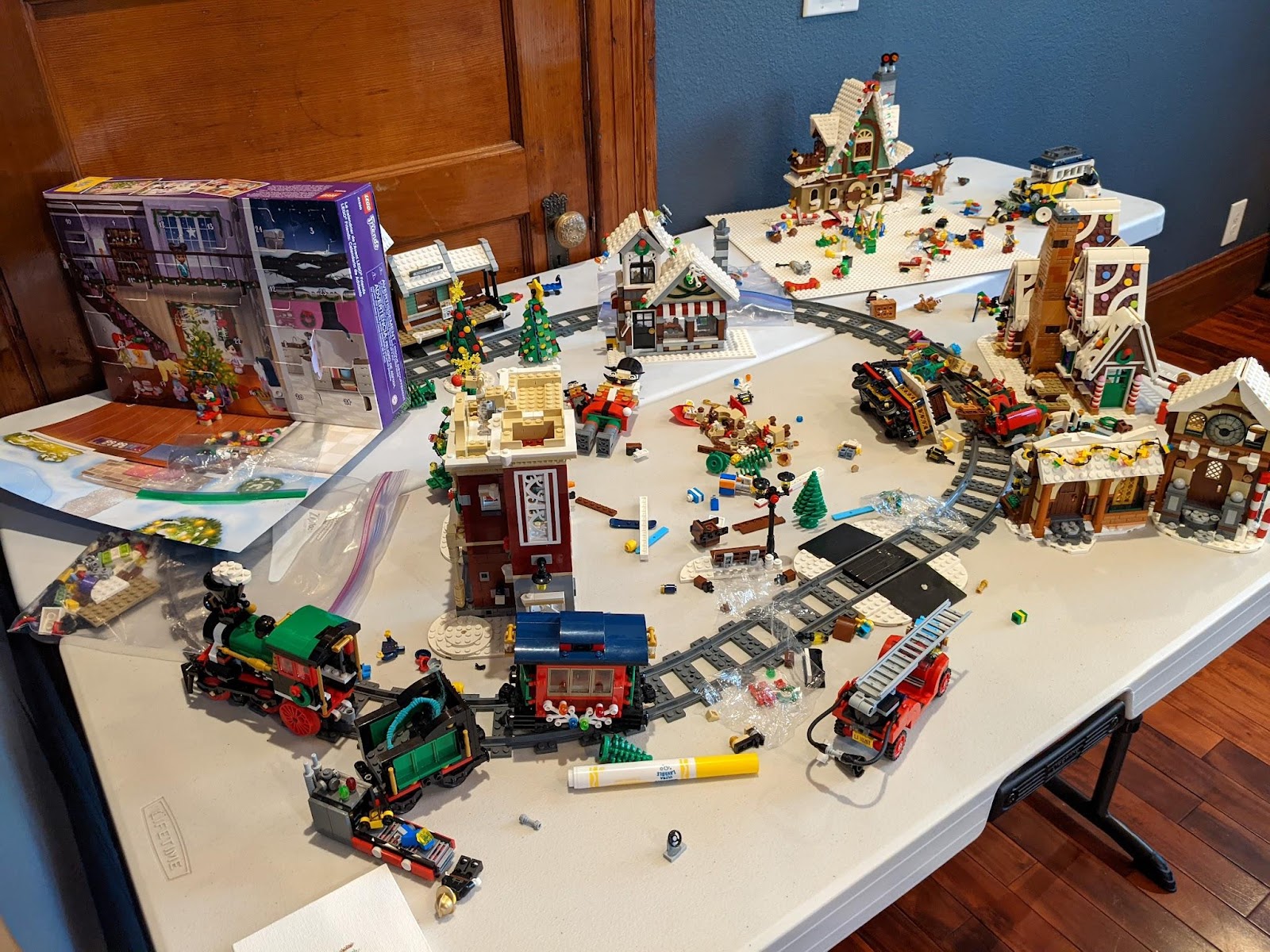 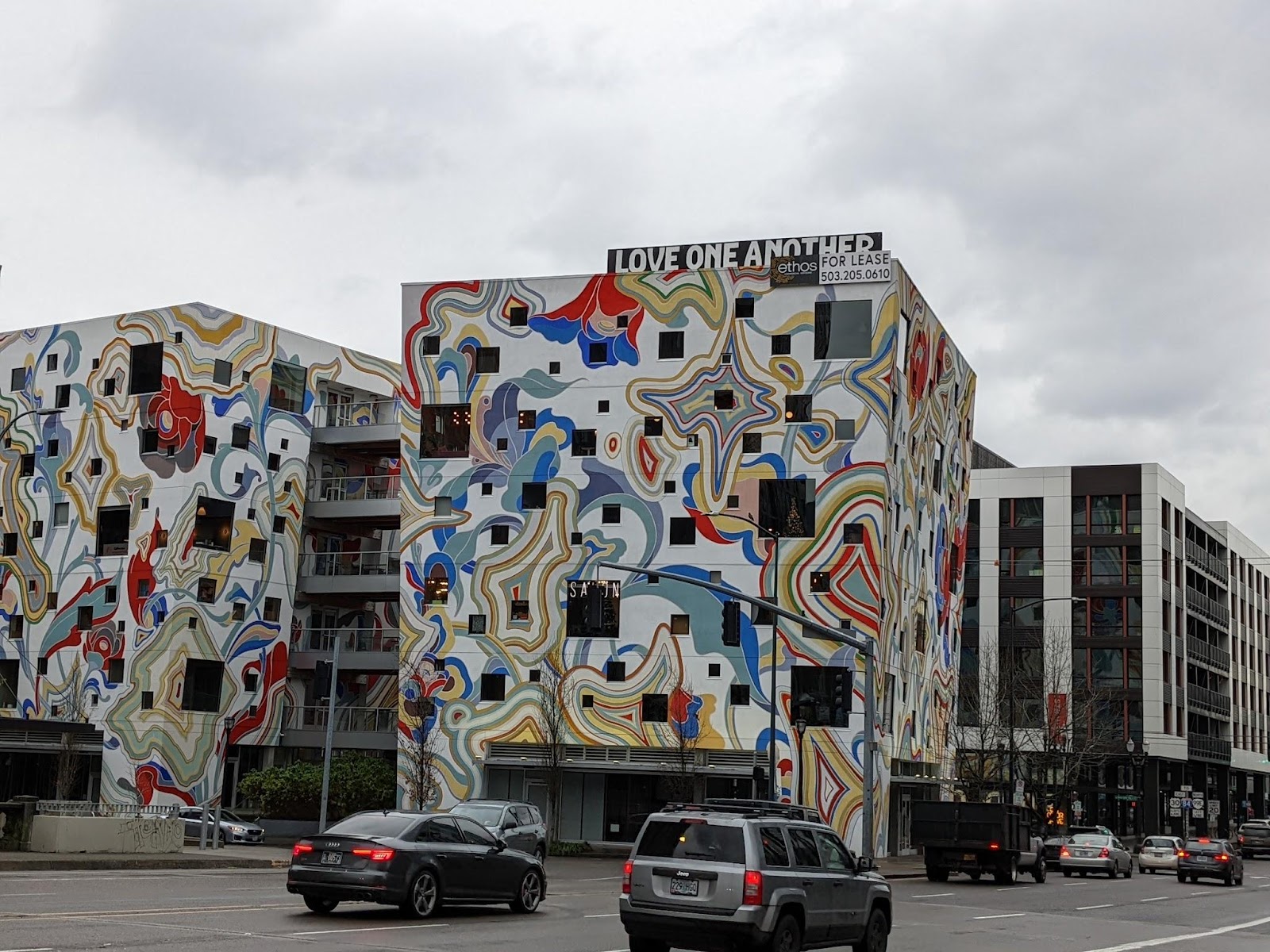 On virtually every street corner of Portopia, is an art exhibit, a Little Free Library box, mobiles, poetry posts, murals, or a kid’s diorama. Thankfully, in a town where all surfaces are a canvas, art is still a priority. Toddler Portopians construct winter wonderlands out of Legos before they can walk. (Here’s looking at you Grands!)

Because beauty is in the DEI eyes of the beholder, aesthetics still matter, even on streets where ugly moved in and you’ve moved out. And though real estate love letters are banned, we crafty Portopians (and greedy developers) entice homeowners to sell us their house with $6 Etsy workaround templates featuring glossy photos of ready-made, blonde, pseudo families with privilege and power to seal the deal with an ingenuous Grandma whose progeny are sending her to the nursing home.

Economic reality, science and conspiracy theories may have dashed dreams to build back better the Burn’s castle towers on its planned Earthquake Ready replacement. But the new bridge’s many aspirational iterations— as grand and illustrative as Portopian visions of restorative justice rooftops over I-5’s head— prove that we care about design as well as fairness and function. 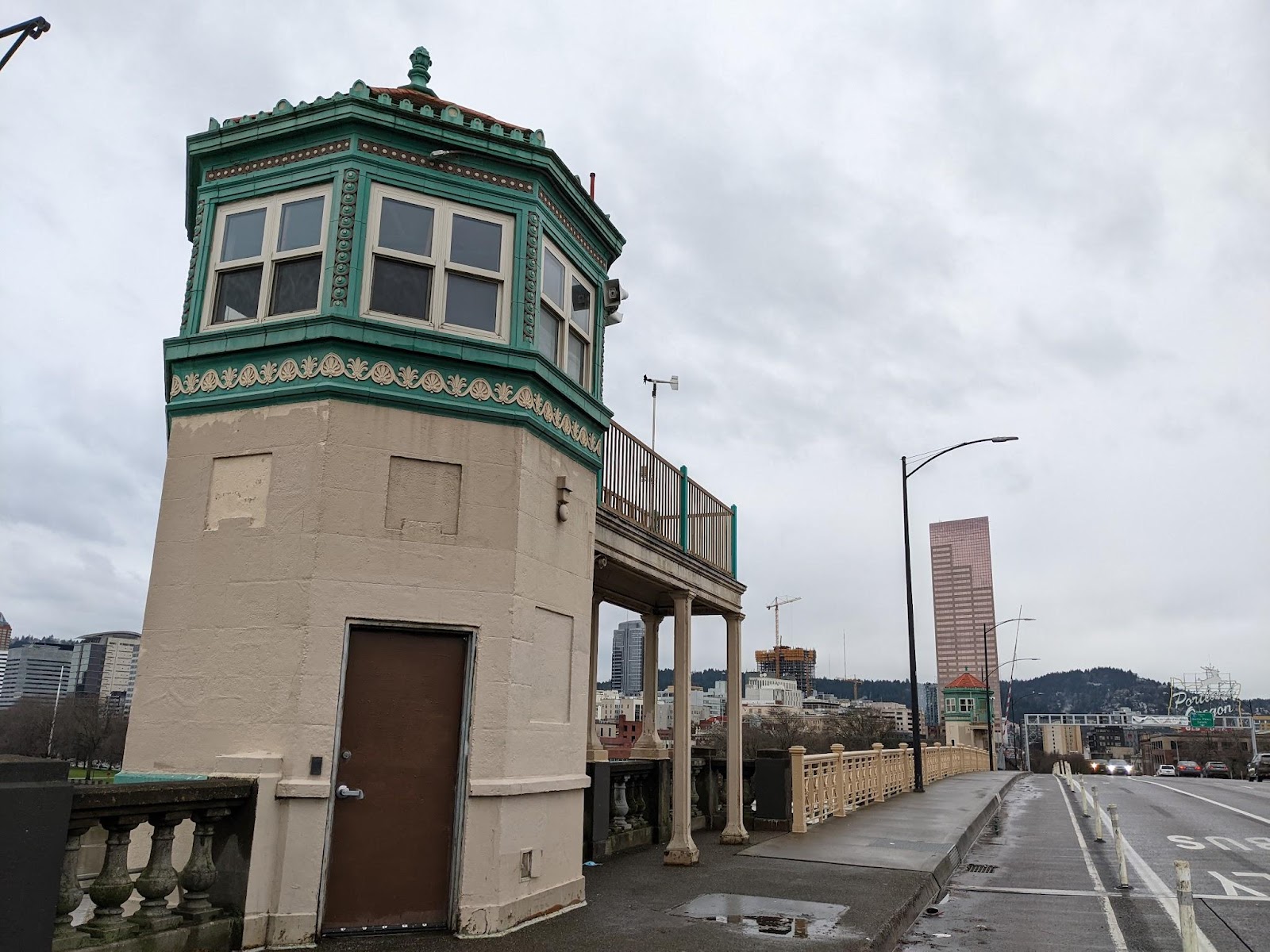 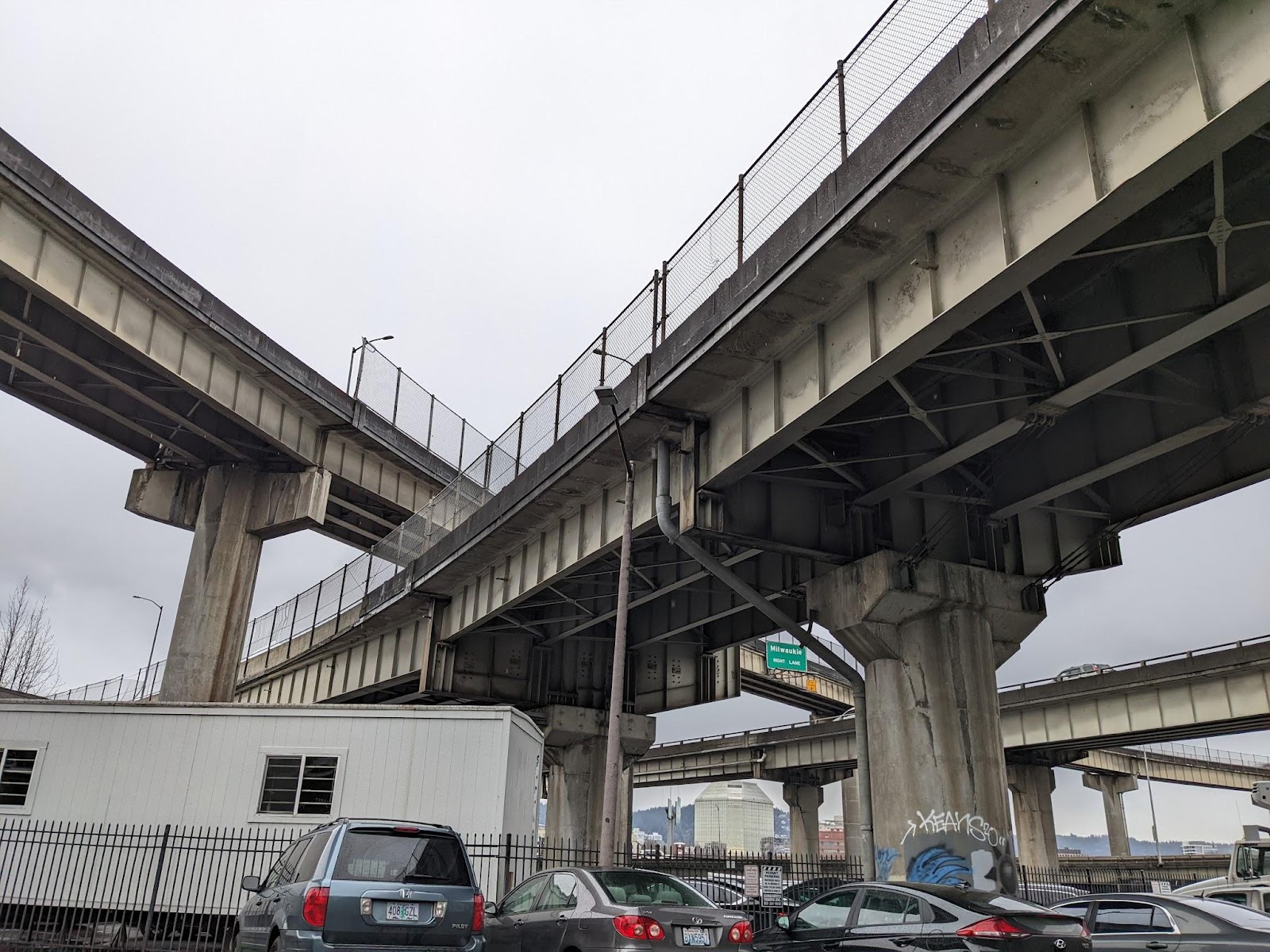 THE KIDS ARE ALRIGHT

Though Portopians are birthing fewer babies, the ones we’ve got matter more. They are our future workforce, problem-solvers, graffiti artists, property shamers, online trolls with no sense of irony. Children do not suffer gladly the sins of the fossils.

In fact, youth groups like the Sunrise Movement PDX along with the 21 so-called Climate Kids backed by an entire, endangered generation sued the government— unsuccessfully so far— for failing to stop End Times. Instead of TikTok challenges, kids have been using their online class time smartly for lawsuits, school walkouts, podcasts, and appeals for social justice to the State Supreme Court, all in desperation to save a planet with no Plan B from coal, crude oil terminals, and highway expansions. Grown-ups can learn a lot from the short life experiences of youngsters rallying around sustainability, Greta Thunberg and Group Norms that call out harm triggers with polite “oopses” or “ouch”.

In short, children are our hope. They are the best of Portopia. They are our reason for making the holidays green and jolly— even if they do covet homeowner equity.

And so we exclaim as we sequester out of sight,

Happy New Year to all and to all a good night.