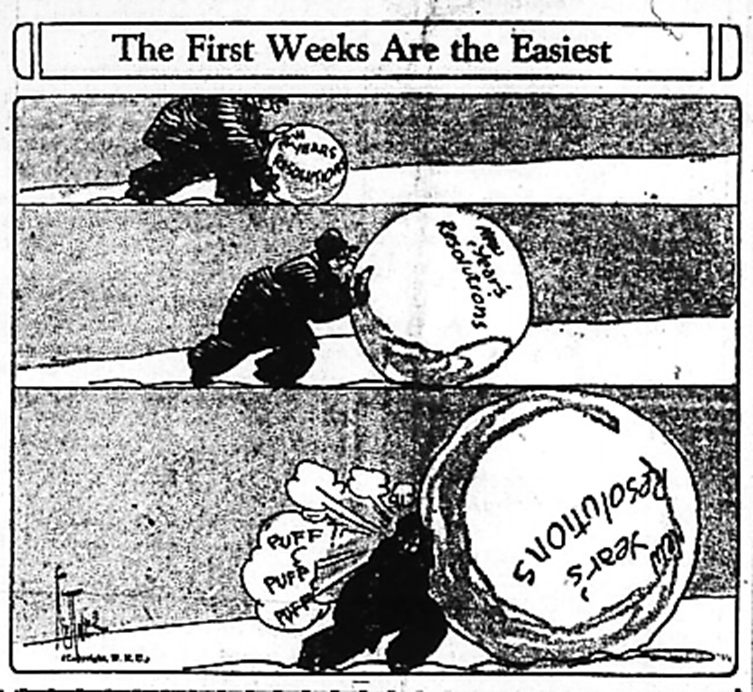 “The First Weeks Are the Easiest” illustration by Magnus G. Kettner

In the Montavilla of yore when New Year came around, publishers of local newspapers, like The Montavilla Times spruced up their pages with some cheerful or thought-provoking images and words.

Most weeklies had small budgets, but luckily they knew inexpensive ways to celebrate the new year. They bought boiler-plate text and images from America’s many journalistic syndicates. Yes, other papers across the country might publish exactly the same items. But who knew? You only read the local rag.

Images of Baby New Year were especially popular. The earliest example I found in the Montavilla press is the illustration below from the Beaver State Herald of December 27, 1907. It shows Baby New Year navigating a dirigible, one of the new forms of aerial transportation.

The Berneker illustration above was paired with verse by then-famous poet Minna Irving (c. 1864 – 1940). Originally published in The New York Times, the poem offers an upbeat message: progress in technology.

Although newspaper poetry has long been out of fashion, it was a popular item in 19th Century and early 20th Century newspapers. Many readers would clip these poems and paste them into scrapbooks.

“Airship Ahoy! What Is Your Cargo?” by Minna Irving republished from the New York Times in the Beaver State Herald, December 27, 1907

The Montavilla Times, which began publication in 1921 and continued until at least 1937, often celebrated the New Year with stock photos featuring Baby New Year.

Father time with his scythe is departing, leaving Baby New Year to record the coming events of 1927.

Baby Time plays with the latest whiz-bang technology: the radio, which in the 1920s brought news and entertainment into homes across America.

For the January 1, 1931 edition of The Montavilla Times, editor Chas. C. Manker selected two New Year’s illustrations from the Western Newspaper Union syndicate that strike a somber note. Gone is the frivolity and optimism of the 1920s. The Great Depression had begun.

In the above illustration by cartoonist and illustrator, Magnus G. Kettner (1882 – 1951), father time struggles with the weight of 1930s volume. Papers swirl around Father Time and threaten to bury his assistant as if escaping the tome.

On the January 8, 1931 The Montavilla Times published Kettner’s apparent prediction for what lay ahead in 1931: Work.

“What’s It Going to Be?”, illustration by Magnus G. Kettner, The Montavilla Times, January 8, 1931